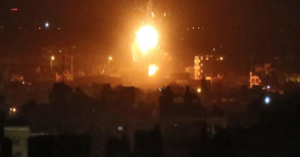 Cluster of balloons attached to an incendiary device, launched from gaza, landed in the southern Israel. – Photo: Ynet [unattributed]

The IDF said following the strike, that it views any attempt to harm the citizens of Israel, severely, and that it will continue to act against “all terror acts.”

“We hold Hamas responsible for everything that happens in the Strip,” said the IDF.

At 05:36 am Thursday, two Red Alert sirens blared through border area communities, as two rocket launches from Gaza into the area were observed. No damage or injuries were reported.

On Monday, a long-range rocket was fired from the Gaza Strip and landed at sea, off the shore of one of Israel’s Southern coastal towns. It did not cause any damage. The IDF said that the Islamic Jihad terror group was behind the launch.

In an unusual statement, the IDF specifically laid blame on Baha Abu Al Ata, Islamic Jihad’s commander of Gaza city, in what can be seen, as a threat of possible Israeli action directed at him.

Al Ata is believed to have been operating under orders from Ziad Nahala, the organizations’ leader.

A senior Islamic Jihad official denied the claims the following day, saying that the accusations made by Israel are made in order to incite the Palestinians against the organization.

According to military sources, Islamic Jihad has been more active, lately, in its efforts to instigate violent attacks ‘under the radar’ and cause disruption
to civilian life.