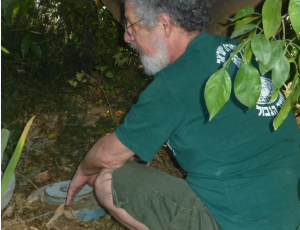 More people have been killed recently by land mines in Colombia than in any other country. The only country with a comparable land mine problem is Afghanistan. In the past 25 years, over 11,000 Colombians have lost their lives due to land mine explosions.

The groundwork for the Colombian mission was laid last May, when Israel attended a meeting in Bogota with officials from the United States and Norway to determine how best to help the Latin American country.

“Land mines are singularly dangerous because they can lie dormant for years, only to kill and maim innocent people without warning,” blogged U.S. Secretary of State John Kerry from the meeting.

“At current mine clearance rates, decades will pass before the country is mine free. The United States and Norway believe that timeline is not acceptable. That’s why we are leading a global effort to increase resources and technical expertise to help Colombia win the battle against these indiscriminate tools of war in the next five years.”

Israel may be involved in other initiatives in Colombia as the South American country heals from five decades of deadly clashes, including helping farmers replace FARC’s cocaine-producing agriculture with food crops.

“Israel and Colombia are old friends,” one Israeli official said.