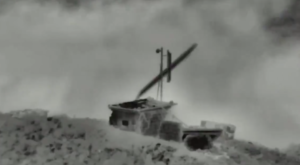 “The IDF holds the Syrian regime accountable for the actions carried out in its territory and warns it from further action against Israeli forces.”

“The IDF is highly prepared for a wide variety of scenarios and will continue to act as necessary in order to ensure the safety of Israeli civilians,” the statement stressed.

Earlier, Syrian media reported that IDF forces attacked positions of the Syrian army in the Quneitra area on the Syrian side of the Golan Heights.

“The aircraft of the Israeli enemy launches a number of missiles at several army positions” in the southwestern province of Quneitra, causing material damage, it said.

The Israeli attack came hours a Syrian UAV infiltrated Israeli territory before being shot down by a Patriot missile.

Earlier tonight, Wednesday July 11th, the IDF targeted three military posts in Syria in response to the infiltration of the Syrian UAV into Israel that was intercepted by the IDF earlier today pic.twitter.com/BvaEOfHNDv

IDF Spokesman Ronen Manelis later said Wednesday that the IDF was in control of the situation at any given moment.

“From the moment the Syrian drone was identified, we had full operational control over his movement. Our forces carried out a number of defensive actions to prevent friction, and once they met the optimal conditions, we intercepted and destroyed it,” said Manelis.