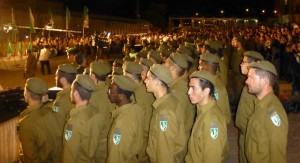 Having recently found out that he’s of Native American descent, Benjamin Barmeyer is excited about joining the IDF, saying, “I fell in love with Israel 4 years ago when I first visited.”

Benjamin Barmeyer of Texas, 22, of Native American descent, is among the diverse pool of young people from abroad who have chosen to join the Israel Defense Forces and enrich the military with their variety.

Barmeyer, who came to Israel with the Garin Tzabar program, found out about his heritage only recently. He was adopted as a baby by Larry and Don Barmeyer, who raised him as Jewish and held a bar mitzvah ceremony for him.

“I found out I am Native American a few weeks ago,” Barmeyer said. “For years, I had a feeling that I was half Native American, but only after I did the tests did I receive confirmation. I am very curious about my roots. But I grew up as a Jew. That is my identity and that is what brought me to Israel.

“I had the privilege of having a warm, supportive home and parents who raised me in an amazing way. I couldn’t ask for better parents. The adoption process and living together at a time when it was not common at all [as a same-sex couple] required a great deal of courage from my parents, and I really admire them for that.”

Barmeyer’s fathers completely support his choice to join the IDF, though they are, of course, worried about him.

His non-Jewish friends, however, were very surprised by his decision.

“They think I went crazy, but I can understand why someone who is not Jewish and is looking in from the outside would think that,” Barmeyer said with a smile.

Upon moving to Israel, Barmeyer was taken in by a family in the Nir Oz kibbutz. He recently completed a pre-military training course.

Speaking of his experience growing up Jewish, Barmeyer said, “There were many places and many times when I felt unsafe displaying my Judaism. I have hidden [my Judaism] more than once to avoid confrontations.”

Still, anti-Semitism was not the reason he decided to move to Israel.

“I fell in love with Israel four years ago, when I first visited here on a trip with the Jewish school I attended. As time passes, I am more and more surprised at how Israel has managed to come so far with such limited resources,” he said.

“The fact that there is such strong hatred towards Israel proves to me that history is repeating itself, and it is important that Israel remain strong in the face of the challenges before it. That is why I am here.”

Barmeyer was joined this week by 75 new immigrants from the U.S. and Canada who are planning to join the IDF, and six more who will be volunteering in national service.

The future soldiers arrived at Ben-Gurion Airport on Wednesday on a Nefesh B’Nefesh flight carrying 233 new immigrants to Israel. The flight was organized in cooperation with the Immigrant Absorption Ministry, the Jewish Agency, the Jewish National Fund and the Israel Scouts’ Garin Tzabar program.

One of the soldiers-to-be aboard the flight was the 50,000th new immigrant to be brought to Israel by the Nefesh B’Nefesh organization, and was given her Israeli identification card by President Reuven Rivlin.

“I am glad to be a part of this special and exciting moment,” Rivlin said.

At the same time, 107 new immigrants from France arrived in Israel on Wednesday with the help of the International Fellowship of Christians and Jews. The organization brought an additional 145 French immigrants to Israel earlier this month.

Many French Jews have chosen to move to Israel due to rising anti-Semitism in France.