was moved to an army base. Soldiers: Disappointed but understand.

The Netzah Yehuda Battalion, which consists of combat ultra-Orthodox soldiers, cancelled a swearing-in ceremony scheduled for Thursday for fear that extremist haredim from “zealous” groups would protest during the event against the recruitment of yeshiva students to the army and civil service, Ynet has learned. 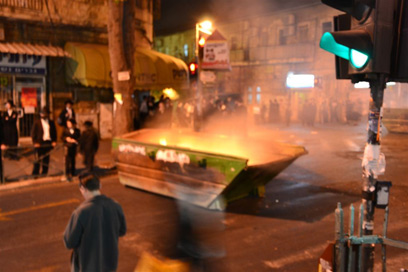 The ceremony was set to take place at Ammunition Hill in Jerusalem. The new recruits will be sworn in at their base without the presence of family and friends, some of whom arrived from abroad to attend the ceremony.

At around 2 am Thursday, after the soldiers completed a march marking the end of their basic training, a commander at the Kfir Brigade base in the Jordan Valley informed them that the swearing-in ceremony had been cancelled.

According to the commander, the IDF had obtained information regarding plans by haredim to protest during the swearing-in ceremony against the enlistment of yeshiva students, as part of the campaign led by “zealots,” in which haredi soldiers are also harassed.

“We can call the police, and of course we can disperse them, but we do not want to cause a war and hatred between brothers because of a swearing-in ceremony,” the commander explained. “We are here for them as well, even if they do not realize it, and it is our duty to prevent unnecessary clashes.”

Over the past week ultra-Orthodox have intensified their protest against the government’s plan to reform the enlistment of haredim into the IDF. Tens of thousands demonstrated outside the army recruitment center in Tel Aviv, and during the course of the week pamphlets condemning the plan to recruit yeshiva students were disseminated.

One of the haredi soldiers told Ynet that he and his comrades were disappointed by the decision. “We were prepared and very excited. Suddenly, just hours before the ceremony, we were told it’s been called off,” he said.

“We understand, and we are not angry, but it’s frustrating,” he said.

Another soldier who serves in the Netzah Yehuda Battalion said the decision “may be interpreted as a capitulation to the haredi street,” adding that a “solution could have been found so that the haredi soldiers would also absorb the symbolism and historic importance of Ammunition Hill.”

The IDF said the swearing-in ceremony would be held at the Kfir Brigade’s training base.