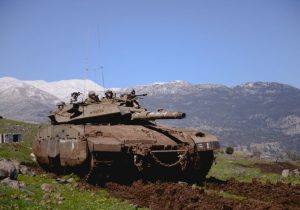 Preparing to qualify as an IDF tank crew member, 15 handpicked women have been undergoing special training, a first in IDF history, performing maneuvers on Merkava Mark III tanks, and will continue through the next eight months until the program’s conclusion.

Despite a relatively low profile, the past few days have seen commencement of the main and most meaningful step in the IDF’s new project allowing women to serve in tank crews for the first time in the army’s history.

Two weeks ago, 15 infantry corps female soldiers were handpicked to participate in this experimental program at the conclusion of the four-month gunner training course at the Ktzi’ot training base, where female combat soldiers from the Caracal Battalion are trained.

The soldiers enlisted in the army last March and have recently joined the hundreds of armored corpsmen receiving training at the Armored Corps main base, Shizafon, in southern Israel.

The IDF prefers to not publicly release the identities of the 15 soldiers and to generally keep a low profile on the project, especially now that this revolutionary new program has entered the practical phase, at the end of which it will be decided whether a female soldier can serve in a tank’s crew.

The soldiers have already performed some maneuvers on some Merkava Mark III tanks, an IDF officer accompanying the program said. These tanks, he added, awaited them at the Shizafon base and will accompany them through the next eight months and until the program’s conclusion.

Reports from training say the soldiers were able to load three shells rapidly and overcome—without unusual difficulty—operating the tank’s braking pedal, which requires no small amount of physical strength to operate.

“They made no big deal of it and were more interested in questions such as which badge and beret they’ll end up having if they become armored corps soldiers,” the officer, who’s expected to receive them for the practical training portion of the project in a few months’ time, recounted.

Their unique training course at Shizafon will include charging, combat and attacking targets with live fire drills. The course has been tailored to the fact the soldiers will be responsible for routine security and not wartime maneuvers.

After their training is completed, the soldiers will be stationed at an operational sector along one of the country’s borders and carry out routine security operations under a battalion combat staff.

The IDF has decided that for now their routine security experience will be learned alongside “regular” backup tanks in order to ensure maximal readiness to fulfill their tasks when called upon.

The army is said to be cautiously optimistic about this ambitious project, despite the fact it has already been criticized by highly experienced armored corps officers such as Brig.-Gen. (res.) Avigdor Kahalani.

“The only consideration taken into account was the operational need to fill the ranks with fighting men and women carrying out routine security tasks in sectors that—up until several years ago—were the sole domain of reservists due to the low threat they posited, such as in the Sinai and the Golan Heights,” the officer explained.

“We won’t make any rash decisions regarding the soldiers,” he continued. “Apart from the skilled commanders imparting their training, they’re also accompanied by nutritionists, doctors and orthopedists to make sure their health isn’t jeopardized.”