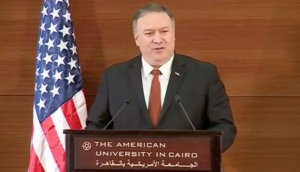 US Secretary of State Mike Pompeo delivered a scathing rebuke of the Obama administration’s Mideast policies on Thursday as he denounced the former president for “misguided” and “wishful” thinking that diminished America’s role in the region, harmed its longtime friends and emboldened its main foe: Iran.

In a speech to the American University in Cairo, Pompeo unloaded on President Donald Trump’s predecessor for being naive and timid when confronted with challenges posed by the revolts that convulsed the Middle East, including Egypt, beginning in 2011. Pompeo laid the blame notably on a vision outlined by President Barack Obama in a speech he gave in Cairo in 2009 in which he spoke of “a new beginning” for US relations with countries in the Arab and Muslim world.

“Remember: It was here, here in this very city, another American stood before you,” Pompeo told an invited audience of Egyptian officials, foreign diplomats and students. “He told you that radical Islamist terrorism does not stem from ideology. He told you 9/11 led my country to abandon its ideals, particularly in the Middle East. He told you that the United States and the Muslim world needed ‘a new beginning.’ The results of these misjudgments have been dire.”

“In falsely seeing ourselves as a force for what ails the Middle East, we were timid about asserting ourselves when the times—and our partners—demanded it,” Pompeo said, without mentioning the former president by name.

Pompeo blamed the previous administration’s approach to the Mideast for the ills that consume it now, particularly the rise of the Islamic State group in Iraq and Syria and Iran’s increasing assertiveness, which he said was a direct result of sanctions relief, since rescinded by the Trump administration, granted to it under the 2015 nuclear deal.

He criticized Obama for ignoring the growth of the Iranian-backed Hezbollah movement in Lebanon to the detriment of Israel’s security and not doing enough to push back on Iran-supported rebels in Yemen.

Since Trump’s election, however, Pompeo said this was all changing.

“The good news is this: The age of self-inflicted American shame is over, and so are the policies that produced so much needless suffering,” he said. “Now comes the real ‘new beginning.’ In just 24 months, actually less than two years, the United States under President Trump has reasserted its traditional role as a force for good in this region, because we’ve learned from our mistakes. We have rediscovered our voice. We have rebuilt our relationships. We have rejected false overtures from enemies.”

In the speech entitled “A Force for Good: America’s Reinvigorated Role in the Middle East,” Pompeo extolled the Trump administration’s actions across the region cementing ties with traditional, albeit authoritarian governments, taking on the Islamic State group in Iraq and Syria and imposing tough new sanctions on Iran.

“President Trump has reversed our willful blindness to the danger of the regime and withdrew from the failed nuclear deal, with its false promises,” Pompeo said.

Since withdrawing from the nuclear deal with Iran last year, the administration has steadily ratcheted up pressure on Tehran and routinely accuses the nation of being the most destabilizing influence in the region. It has vowed to increase the pressure until Iran halts what US officials describe as its “malign activities” throughout the Mideast and elsewhere, including support for rebels in Yemen, anti-Israel groups and Syrian President Bashar Assad.

“The nations of the Middle East will never enjoy security, achieve economic stability, or advance the dreams of its peoples if Iran’s revolutionary regime persists on its current course,” Pompeo said.

In a rebuttal to the speech, a group of mainly former Obama administration foreign policy officials rejected Pompeo’s assertions as petty and weak.

“That this administration feels the need, nearly a decade later, to take potshots at an effort to identify common ground between the Arab world and the West speaks not only to the Trump administration’s pettiness but also to its lack of a strategic vision for America’s role in the region and its abdication of America’s values,” the National Security Action group said in a statement.

Pompeo’s speech came on the third leg of a nine-nation Mideast tour aimed at reassuring America’s Arab partners that the Trump administration is not walking away from the region amid confusion and concern over plans to withdraw US forces from Syria.

Trump has boasted of his close relationship with al-Sisi, a former general who has been criticized for his human rights record and democratic shortcomings. The Trump administration has resumed weapons sales to Egypt that had been suspended over human rights concerns, including the jailing of several American citizens on what US officials say are false charges.

At a brief news conference with Shoukry, Pompeo said he raised human rights with both al-Sisi and Shoukry and reminded them that “open and honest public debates are a hallmark of a thriving society.” He said he discussed a “panoply” of rights concerns, including the detention of political prisoners but gave no specifics.

Shortly before Pompeo arrived, the State Department noted improvements in Egypt’s human rights record. It welcomed the recent acquittal of employees of American civil society groups who had been “wrongly convicted of improperly operating in Egypt” and said the US supports al-Sisi’s pledges “to amend Egyptian law to prevent future miscarriages of justice.” On Wednesday, however, an Egyptian court sentenced a leading activist behind the country’s 2011 uprising to 15 years in prison after convicting him of taking part in clashes between protesters and security forces later that year.