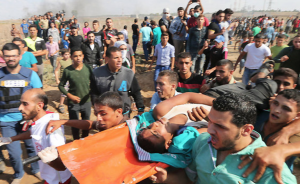 International media is focusing on Palestinian deaths by Israeli security forces, mostly ignoring that the Palestinians were killed after stabbing or killing civilians and/or police.

Although the international media, for the large part, has not been devoting significant coverage to the recent wave of Palestinian terrorist attacks in Israel, many of the outlets that have reported the attacks have failed to accurately represent the situation.

One example is a headline in British newspaper The Independent about Saturday’s stabbing attack near Jerusalem’s Damascus Gate, in which two Jewish men in their 60s were wounded. The attacker, Ishak Badran, 16, was shot and killed by police who rushed to the scene.

The paper used the headline “Israeli security forces kill boy, 16, after stabbing in Jerusalem as violence continues,” ignoring the fact that the boy was the one who carried out the stabbing attack.

The article described the attacker as “the seventh Palestinian shot dead by Israeli security forces in just 24 hours.”

Only in the second paragraph of the article was the stabbing attack described.

Reuters news agency also focused on Israel’s steps to fight terrorism, rather than on the attacks themselves, using the headline “Israeli forces shoot dead five Palestinians as violence rages on.”

Overall, however, the spate of terror attacks has failed to make front page news, with both The New York Times and The Guardian reporting instead on the Islamic State group and on the terrorist attack in Ankara.