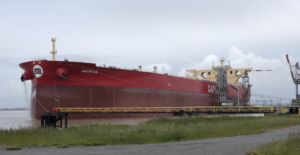 Senior Revolutionary Guards commander warns, that If Britain does not release the Iranian oil tanker the British Royal Marines detained off Gibraltar for disregarding EU ban on oil shipments to Syria, it is Iran’s duty to seize a British oil tanker.

DUBAI – Iran should seize a British oil tanker if an Iranian tanker detained off Gibraltar earlier this week is not released immediately, a senior Revolutionary Guards commander said in a tweet on Friday.

British Royal Marines seized the supertanker Grace 1 on Thursday for trying to take oil to Syria in violation of EU sanctions, a dramatic step that drew Tehran’s fury and could escalate its confrontation with the West.

“If Britain does not release the Iranian oil tanker, it is the authorities duty to seize a British oil tanker,” said Revolutionary Guards Major General Mohsen Rezai, who is also secretary of Iran’s Expediency Council, a powerful state body.

“Islamic Iran in its 40-year history has never initiated hostilities in any battles but has also never hesitated in responding to bullies,” Rezai said on his Twitter account.

The Grace 1 was impounded off Gibraltar, a British territory on the southern tip of Spain, after sailing around Africa, the long route from the Middle East to the mouth of the Mediterranean.

Excellent news: UK has detained the supertanker Grace I laden with Iranian oil bound for Syria in violation of EU sanctions. America & our allies will continue to prevent regimes in Tehran & Damascus from profiting off this illicit trade.

While the European Union has banned oil shipments to war-torn Syria, a close ally of Iran, since 2011, it had never seized a tanker at sea. Unlike the United States, Europe does not have broad sanctions against Iran.

Question:
If a conflict between Iran & Britain ensues, will the Iranian Bozo threaten to destroy Israel, as they did should Trump attack them?

I’m only asking just in case the UK wants our help.
We have an agent in the area. @TheMossadIL pic.twitter.com/lwmHzMhM6a