Iraqi vice-president warns: Independent Kurdistan will be a ‘second Israel’ 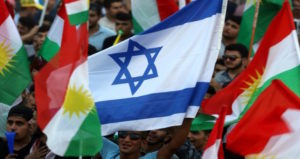 After the Jewish State became the only country to support a Kurdish referendum for independence in northern Iraq, Vice President Nuri al-Maliki’s office, released a statement,  “We will not allow the creation of a second Israel, in the north of Iraq.”

An Iraqi vice president warned Sunday that Baghdad would not tolerate the creation of “a second Israel” after the Jewish state became the only country to support a planned Kurdish independence referendum in northern Iraq.

The leaders of autonomous Iraqi Kurdistan must “call off the (September 25) referendum that is contrary to the constitution and does not serve the general interests of the Iraqi people, not even the particular interests of the Kurds”, said Vice President Nuri al-Maliki.

“We will not allow the creation of a second Israel in the north of Iraq,” Maliki, a Shiite former prime minister, said at a meeting with US ambassador Douglas Silliman, in a statement released by the vice president’s office.

A country set up on a religious or ethnic base, like the Jewish state established in 1948, would not be acceptable, Maliki said.

He warned that an independence vote would have “dangerous consequences for the security, sovereignty and unity of Iraq”, and called for dialogue between Baghdad and the Kurdish Regional Government in the northern city of Erbil.

As opposed to Muslim countries in the region as well as the United States and Western allies, Israel has come out in apparent support of the referendum.

On Tuesday, Israeli Prime Minister Benjamin Netanyahu backed the Kurds’ aspirations for a state of their own, without specifically referring to the autonomous Kurdish region in northern Iraq.

“While Israel rejects terror in any form, it supports the legitimate efforts of the Kurdish people to attain a state of its own,” a statement from his office said.

An Israeli flag was flown alongside Kurdish flags at a rally in Erbil on Friday in support of the referendum.

The United Nations has urged Iraqi Kurdish leader Massud Barzani to drop plans for the controversial referendum and enter internationally-backed talks with Baghdad aimed at reaching a negotiated deal within three years.