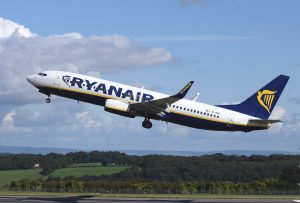 Ryanair’s Chief Commercial Manager David O’Brien said in a press conference Wednesday that the company will offer seats starting at 20 euros (about $22) for a one-way ticket to Paphos, Cyprus, to celebrate the launch of the 2017 winter flight schedule in Israel. These prices will be available until midnight Thursday.

As of Wednesday night, this special price was available for only one flight, scheduled for Apr. 23. For other dates, the price was about 30 euros (about $32), with the average return ticket costing 35 euros (about $38). Other new flight routes will be listed on the carrier’s website in the coming weeks.

“Ryanair’s significantly expanded operation in Israel is big news that will have an immediate impact by promoting incoming tourism and reducing the prices of flights to and from Israel,” Tourism Minister Yariv Levin said. “The company is expressing great trust in Israel’s tourism product, launching large-scale flight service for the first time to Ben-Gurion Airport and almost tripling the company’s operations in Eilat.”

Levin added that “the tourism industry is currently undergoing a major revolution, and Ryanair’s significant [expansion] in Israel is evidence of the notable improvement in Israel’s attractiveness as a tourist destination. This improvement is reflected even now with the increase in the number of tourists visiting the country.”

Transportation Minister Yisrael Katz is due to speak with Ryanair about the option of establishing a base of operations at Ramon Airport in southern Israel, which is expected to open in October.

Katz said, “The open skies reform created a revolution in pricing and destinations, prompting a significant increase in the number of passengers and a decrease in flight fares. The expansion of Ryanair’s operations in Israel is another stage in the open skies revolution.”

Ryanair currently operates out of 85 bases, reaches 200 airports in 33 countries, maintains over 1,800 routes and flies about 119 million passengers per year. The airline’s fleet includes 350 Boeing 737s, and Ryanair has ordered 315 more. The Ryanair application is installed on more than 15 million cellphones, and their website is viewed by more than 46 million people every month. Some 93% of passengers say their service was “good” or “very good.”