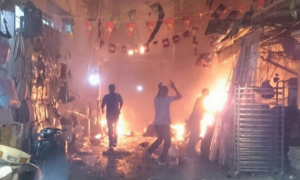 The two blasts were separated by minutes. Local reports indicate two suicide bombers conducted the attacks and that the body of a third suicide bomber> was found at the scene of the bombings.

ISIS has claimed responsibility for the massacre on websites that are associated with it. It claimed that Hezbollah was holding an event at the location when the attack took place.

The explosions took place in the Ain el Sikkeh area, next to the Burj el-Barajneh Palestinian “refugee camp,” at a busy time in the evening when the streets were full of families gathering after work.

Burj el-Barajneh is a stronghold of the Iran terror proxy Hezbollah, and has been targeted by attacks various times in the past.

Hezbollah is currently targeted by Islamic State (ISIS) and Syrian rebels as it fights alongside Iran in the Syrian civil war.

There were repeated car bomb attacks against Shi’ite districts of Beirut in recent years.