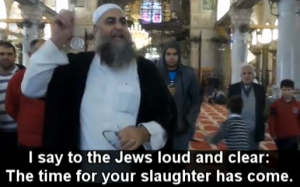 General Director of Jordan’s run Islamic Waqf in Jerusalem spewed a flurry of lies & incitement against Israel in an interview on Friday to the Palestinian news, that can only be meant to anger and reignite violence against Jews.

Azzam al-Khatib, General Director of the Islamic Waqf in Jerusalem, spewed a flurry of lies and incitement against Israel Friday.

The Dome of the Rock seen on the Temple Mount. – Photo: IsraelandStuff/PP

Talking to Palestinian news, he claimed that Israeli organizations are trying to escalate tensions by “breaking into” the complex of the Al-Aqsa Mosque.

He said that every “break-in” to Al-Aqsa Mosque, even when perpetrated by only one person, is forbidden because it is illegal, unethical, and constitutes a provocation to the feelings of Muslims.

Khatib also asserted that Muslims, Jerusalem and Al-Aqsa are besieged by an “open war” waged by Israel through taxation, expulsion of Arab residents, and daily break-ins to the Al-Aqsa complex meant to provoke the feelings of Muslims.

Khatib also claimed that Jewish groups were planning to destroy Al-Aqsa mosque to build the third temple in its place. He called this alleged plan “the height of insanity,” which would ignite worldwide anger.

“If they damage Al-Aqsa Mosque, I assume that there won’t be a Muslim in the world who will remain with arms folded in light of the direct attack on this place of Muslim faith, Al-Aqsa,” he said.

Despite Israel having liberated the Mount – the holiest site in Judaism – in the 1967 Six Day War, the Jordanian Waqf has been left in de facto control of the Temple Mount, and Israeli police kowtow to the Waqf’s discriminatory ban on Jewish prayer at the site.