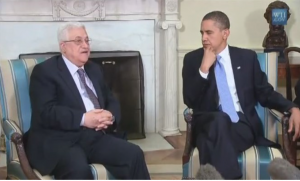 An Israeli official on Friday accused President Barack Obama of colluding with the Palestinians in a “shameful move against Israel at the UN” after learning the White House did not intend to veto a Security Council resolution condemning settlement construction in the West Bank and east Jerusalem the day before.

“President Obama and Secretary Kerry are behind this shameful move against Israel at the UN,” the official said. “The US administration secretly cooked up with the Palestinians an extreme anti-Israeli resolution behind Israel’s back which would be a tail wind for terror and boycotts and effectively make the Western Wall occupied Palestinian territory,” he said calling it “an abandonment of Israel which breaks decades of US policy of protecting Israel at the UN.”

In the Palestinians’ first remarks since Egypt decided to postpone a vote on settlements in the UN Security Council, Palestinian FM Riyad Al-Malki called the Egyptian move “suicidal.”

During a meeting of Arab foreign ministers at the UN, Al-Malki said Palestinian ambassador Riyad Mansour demanded a draft resolution be brought to a vote on the original date set. According to Al-Malki, the Egyptian ambassador insisted that the decision is in the hands of the Arab Quartet, who are set to meet Friday at an undetermined time.

“Palestine still hopes that there will be a reexamination of the issue because we believe that this draft resolution reflects a great victory not only for Palestinians, but also for the Arab world,” said Al-Maliki.

According to a senior Israeli official, Prime Minister Benjamin Netanyahu turned to President-elect Donald Trump and his transition team to help head off a critical UN resolution after learning that the White House did not intend to veto the measure.

The Egyptian-sponsored resolution had demanded that Israel halt settlement activities in occupied territories claimed by the Palestinians and declared that existing settlements “have no legal validity.”

But under heavy Israeli pressure, Egypt called off a planned vote in the Security Council hours before it was to take place. In the diplomatic activity ahead of the postponement, both Netanyahu and Trump issued nearly identical statements urging the US to veto the measure.

“After becoming aware that the administration would not veto the anti-Israel resolution, Israeli officials reached out to Trump’s transition team to ask for the president-elect’s help to avert the resolution,” the Israeli official said, speaking on condition of anonymity because he was discussing behind-the-scenes diplomatic activity.

Additionally, the official added that Israel sees the Obama administration’s intent to avoid vetoing the resolution as a violation of “core commitment” of US security and a final attempt to tie the hands of the incoming administration.

On Friday, Egypt said its president had received a call from Trump in which they both agreed to give the incoming US administration a chance to try and resolve the Israeli-Palestinian conflict. The call came hours after Egypt indefinitely postponed the UN vote.

Egyptian presidential spokesman Alaa Yousef said, “During the conversation, they discussed regional issues and developments in the Middle East. The Presidents agreed on the importance of providing adequate opportunity to the new US administration to deal with every aspect of the Palestinian issue, in order to achieve a full and final settlement”.

The proposed resolution would have been more than symbolic. While it did not call for imposing sanctions on Israel, its language could have hindered Israel’s negotiating position in future peace talks. Given the widespread international opposition to the settlements, it would have been nearly impossible for the Trump administration to reverse it.

It remained unclear Friday whether the measure would come up for a vote in the council before Obama leaves office.

A senior Palestinian official, speaking anonymously according to protocol, said attempts are still underway to bring the resolution to vote.

He said after Egypt called off the vote there are still several other sponsors—Venezuela, Malaysia, Senegal and New Zealand—that could present it.

The official said Egypt didn’t consult with the Palestinians about delaying the vote and it was a “complete shock” for them.

In a Christmas greeting on Friday, Palestinian President Mahmoud Abbas said: “Despite the Israeli occupation, our presence in our homeland and the preservation of our cultural and national heritage are the most important form of resistance in the face of the darkness of a foreign colonialist occupying power.”

Prime Minister Benjamin Netanyahu issued a statement Thursday in which he asked the United States to veto anti-Israel resolution. “I hope the United States will not abandon this policy. I hope it will act according to the principles that President Obama himself stated in his speech to the UN General Assembly in 2011 that we will not reach peace through UN resolutions, but only through direct negotiations between the parties. As such, this draft resolution is bad. Bad for Israel, bad to the United States and bad for peace, “said Netanyahu.

Below, the text of the Egyptian-drafted resolution 2334/2016 on Jewish settlements.

Guided by the purposes and principles of the Charter of the United Nations, and reaffirming, inter alia, the inadmissibility of the acquisition of territory by force,

Reaffirming the obligation of Israel, the occupying Power, to abide scrupulously by its legal obligations and responsibilities under the Fourth Geneva Convention relative to the Protection of Civilian Persons in Time of War, of 12 August 1949, and recalling the advisory opinion rendered on 9 July 2004 by the International Court of Justice,

Condemning all measures aimed at altering the demographic composition, character and status of the Palestinian Territory occupied since 1967, including East Jerusalem, including, inter alia, the construction and expansion of settlements, transfer of Israeli settlers, confiscation of land, demolition of homes and displacement of Palestinian civilians, in violation of international humanitarian law and relevant resolutions,

Expressing grave concern that continuing Israeli settlement activities are dangerously imperilling the viability of the two-State solution based on the 1967 lines,

Recalling the obligation under the Quartet Roadmap, endorsed by its resolution 1515 (2003), for a freeze by Israel of all settlement activity, including “natural growth”, and the dismantlement of all settlement outposts erected since March 2001,

Recalling also the obligation under the Quartet roadmap for the Palestinian Authority Security Forces to maintain effective operations aimed at confronting all those engaged in terror and dismantling terrorist capabilities, including the confiscation of illegal weapons,

Condemning all acts of violence against civilians, including acts of terror, as well as all acts of provocation, incitement and destruction,

Reiterating its vision of a region where two democratic States, Israel and Palestine, live side by side in peace within secure and recognized borders,

Stressing that the status quo is not sustainable and that significant steps, consistent with the transition contemplated by prior agreements, are urgently needed in order to (i) stabilize the situation and to reverse negative trends on the ground, which are steadily eroding the two-State solution and entrenching a one-State reality, and (ii) to create the conditions for successful final status negotiations and for advancing the two-State solution through those negotiations and on the ground,

1. Reaffirms that the establishment by Israel of settlements in the Palestinian territory occupied since 1967, including East Jerusalem, has no legal validity and constitutes a flagrant violation under international law and a major obstacle to the achievement of the two-State solution and a just, lasting and comprehensive peace;

2. Reiterates its demand that Israel immediately and completely cease all settlement activities in the occupied Palestinian territory, including East Jerusalem, and that it fully respect all of its legal obligations in this regard;

3. Underlines that it will not recognize any changes to the 4 June 1967 lines, including with regard to Jerusalem, other than those agreed by the parties through negotiations;

5. Calls upon all States, bearing in mind paragraph 1 of this resolution, to distinguish, in their relevant dealings, between the territory of the State of Israel and the territories occupied since 1967;

6. Calls for immediate steps to prevent all acts of violence against civilians, including acts of terror, as well as all acts of provocation and destruction, calls for accountability in this regard, and calls for compliance with obligations under international law for the strengthening of ongoing efforts to combat terrorism, including through existing security coordination, and to clearly condemn all acts of terrorism;

7. Calls upon both parties to act on the basis of international law, including international humanitarian law, and their previous agreements and obligations, to observe calm and restraint, and to refrain from provocative actions, incitement and inflammatory rhetoric, with the aim, inter alia, of de-escalating the situation on the ground, rebuilding trust and confidence, demonstrating through policies and actions a genuine commitment to the two-State solution, and creating the conditions necessary for promoting peace;

8. Calls upon all parties to continue, in the interest of the promotion of peace and security, to exert collective efforts to launch credible negotiations on all final status issues in the Middle East peace process and within the time frame specified by the Quartet in its statement of 21 September 2010;

9. Urges in this regard the intensification and acceleration of international and regional diplomatic efforts and support aimed at achieving, without delay a comprehensive, just and lasting peace in the Middle East on the basis of the relevant United Nations resolutions, the Madrid terms of reference, including the principle of land for peace, the Arab Peace Initiative and the Quartet Roadmap and an end to the Israeli occupation that began in 1967; and underscores in this regard the importance of the ongoing efforts to advance the Arab Peace Initiative, the initiative of France for the convening of an international peace conference, the recent efforts of the Quartet, as well as the efforts of Egypt and the Russian Federation;

10. Confirms its determination to support the parties throughout the negotiations and in the implementation of an agreement;

11. Reaffirms its determination to examine practical ways and means to secure the full implementation of its relevant resolutions;

12. Requests the Secretary-General to report to the Council every three months on the implementation of the provisions of the present resolution;

13. Decides to remain seized of the matter.