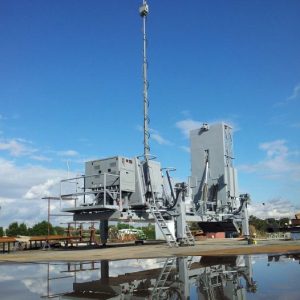 Israel has been cooperating with India in various technologies & military systems, including missiles and unmanned aerial vehicles during the last few years, bringing India and Israel into a uniquely strong and strategic partnership.

IAI announced on Thursday that it has signed a mega-contract worth more than $1.6 billion to provide advanced medium-range surface-to-air missiles (MRSAMs) to the Indian Army. The balance of some $400m. in contracts has been awarded to Rafael Advanced Defense Systems.

IAI president and CEO Joseph Weiss stated: “Over the past 25 years, IAI has worked with the Indian defense industries and armed forces in many areas as part of our strategic partnership. The current contracts represent an enormous expression of confidence by the government of India in IAI’s capabilities and advanced technologies.”

Weiss added that “this contract award also recognizes the professionalism of all of Israel’s defense industries. We at IAI are proud to be leading this flagship project after a long and joint development process.”

President Reuven Rivlin spoke with Weiss and congratulated him on the signing of the deal with India. According to Rivlin’s office, the two men spoke about the foundations for the deal during Rivlin’s visit to India four months ago and of the importance it played in strengthening the aerospace industry in Israel.

The deal comes three months before Indian Prime Minister Narendra Modi is due to arrive in Israel for a state visit. His visit, which will coincide with the 25th anniversary of diplomatic relations, comes at a time when the arms trade between the two countries is growing.

In June, more than 50 Indian defense companies will be showcased at the ISDEF exhibition in Tel Aviv, at the largest national pavilion at the exhibition.

In February, ahead of the Aero India exposition in Bengaluru (Bangalore) which saw over a dozen Israeli companies showcasing their military technology, the Defense Ministry’s international cooperation director, Brig.-Gen. (res.) Michel Ben-Baruch, said there has been a “strengthening of cooperation between Israel and India in many fields” in recent years, with the most prominent area being defense technology.

Israel has been supplying India with various weapons systems, missiles and unmanned aerial vehicles over the last few years, making India one of Israel’s largest buyers of military hardware. Over the last five years, bilateral non-defense trade between the countries has averaged $4.6b. per annum and defense trade has seen annual sales worth more than $1b.

India is one of the largest importer of arms, with a 14% share in global imports between 2011 and 2015, according to the Stockholm International Peace Research Institute. After Russia and the United States, Israel is the largest source of key defense equipment for India as well as in other areas, such as agriculture and water management.