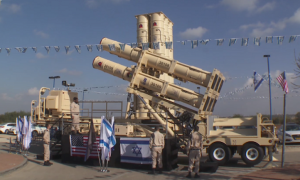 The Arrow 3 interceptor, designed to shoot down missiles above the atmosphere, was handed to air force bases in Israel after successful testing by Israel and the United States at the end of 2015.

A defence ministry statement said Israel and the US were dedicated to the continued development and enhancement of ballistic missile defence systems as “threats continue to grow and new emerging threats surface”.

The Arrow project was first launched in 1988 as part of the then Star Wars program under late US president Ronald Reagan that was abandoned in 1993.

Partly financed by the United States, the Arrow system was developed and produced by Israeli Aerospace Industries in partnership with Boeing.

Israel’s foe Iran has carried out a number of missile tests in recent months, which the United States and European governments have said are a breach of its commitments under the 2015 nuclear deal.

Western powers say the missiles are capable of carrying nuclear warheads and therefore go against the deal, while Iran says its missile program is “non-negotiable”.

Israel had opposed the deal between Iran and major powers, which lifted a wide range of international sanctions in exchange for limits on Iran’s nuclear program.