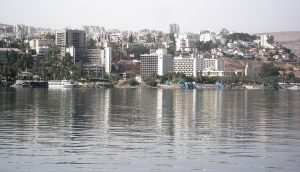 The tunnel, which appears to have been constructed by Crusaders some 800 years ago, runs underground for 7 meters (23 feet) and is exposed at one end near the promenade in the Old City of Tiberias. The tunnel, built from carved basalt rocks, was unearthed as part of a program to rehabilitate and preserve the heart of the old city.

“The tunnel we discovered may very likely have been a secret passage leading to the harbor of Tiberias, which we know about from Crusader historical sources,” said Joppe Gosker, director of the excavation on behalf of the Israel Antiquities Authority.

Gosker said the sources “describe the siege imposed by the Muslim ruler Salah a-Din on the citadel in July 1187, in which Princess Eschiva, wife of the knight Raymond of Tripoli, was confined.”

“We know from the sources that Raymond directed his wife to escape to the harbor and board a ship where she would stay until he came to rescue her,” Gosker said. “It seems that the tunnel we revealed led from the citadel to the sea, and probably provided a safe route for a maritime escape in times of danger. The general plan of the citadel built by the Crusaders on the shore of the Sea of Galilee in the 12th century is known from previous excavations, and today one can see the citadel’s gate and the remains of several of its walls in Tiberias.”

The events in Tiberias led to the Battle of Hattin on July 4, 1187, in which Salah a-Din’s army defeated the Crusader kingdom.

Tiberias Mayor Yossi Ben David visited the excavation site and is planning to feature it in a development plan for the area that the Tiberias Municipality is promoting in conjunction with the Israel Government Tourism Company.