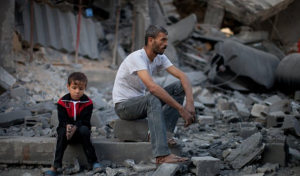 Israel’s Shin Bet security agency says Hamas conducted ‘a takeover from the inside,’ leaving World Vision unaware of the fact that it was being exploited to channel tens of millions of dollars from food, health, and rehabilitation towards tunnel construction, weapons, and wages to Hamas militants.

Hamas infiltrated a large international aid organization operating in Gaza and redirected tens of millions of dollars – 60 percent – of the organization’s budget to its military wing, the Shin Bet (Israel Security Agency) announced on Thursday, following an investigation that lasted almost two months.

The World Vision organization, which operates in 100 countries and employs 46,000 people, fell victim to a complex, pre-planned Hamas takeover scheme, a senior Shin Bet source said, adding that Hamas’s military wing stole 7.2 million dollars a year from the budget, aimed at food, humanitarian assistance, and aid programs for disabled children, and channeling the funds to weapons acquisitions, tunnel building, and other preparations for war with Israel.

The source named Gazan civil engineer Muhammad Halabi, who has been heading World Vision’s Gaza branch, as the operative who infiltrated the organization in 2005, rising through its ranks to become head of the branch in 2010.

“The scope of the infiltration by Hamas to this international organization is an unusual event,” the Shin Bet source said. “It reveals a certain pattern,” he added.

World Vision was unaware of the fact that it was being exploited to channel funds towards war, the source stressed.

Halabi was arrested while trying to enter Israel from Gaza via the Erez Crossing in mid-June. During subsequent interrogation, the Shin Bet learned that he had been recruited by Hamas’s military wing in 2004 and received a “very focused mission, to penetrate an international aid organization and exploit its resources.” Funds stolen from World Vision were also used to build a military base in Gaza and the pay the salaries of Al-Kassam Brigade military wing members.

Hamas used the millions to purchase construction and maintenance means for its military facilities and tunnels, such as metals, fences, covering up greenhouses, and pipes, according to the investigation.

This came at the expense of food meant for the needy in Gaza, often literally. Packages of goods for poor Gazans were redirected to Hamas battalions in northern Gaza, the Shin Bet source said, adding that 2500 food packages, worth 100 dollars each, were taken in this manner from the people of Gaza.

Mental health aid funds were also stolen and sent to the military wing. Some of the money went to buying weapons from arms traders in Sinai, according to the investigation.

Halabi “in most cases issued false documentation” to facilitate the scheme, the source said. “This was an organized plan. Halabi appointed people to the organization who enabled him to do as he pleased,” he added.

World Vision’s east Jerusalem office was raided in recent days. The organization’s representatives, who were unaware of what had been taking place, were due to meet with Israeli security officials on Thursday evening.

“Hamas knew how to exploit a weakness in supervision,” the source added. “While we talk about the difficult economic situation in Gaza, Hamas is taking resources for its military operatives.” Last month, the Shin Bet announced that the arrest of two Gazans with terrorism-financing cash hidden in their shoes enabled Israel to gain valuable intelligence on the underground network of tunnels Hamas and Islamic Jihad are digging in Gaza.

Security forces disclosed that they had nabbed two Gazans in June trying to smuggle cash from the Strip to Hamas operatives in the West Bank to finance terrorism.

Hamas intelligence agents have begun approaching Gazan civilians with travel permits to enter Israel with requests to smuggle cash or make purchases on behalf of Hamas, or to pass on messages to Hamas in the West Bank.

Those investigations underlined “Hamas’s cynical use of Israeli efforts to ease economic conditions for the Gazan civilian population.

Thousands of Gazans enter Israel every month for humanitarian, medical, and trade purposes, and Hamas often attempts to exploit these entries to transfer terrorist finances,” the Shin Bet said at the time.