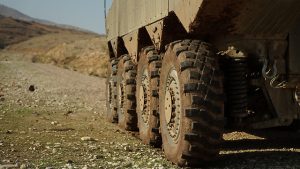 It is capable of carrying 12-13 combat soldiers, and was developed and built following the lessons of Operation Protective Edge and is expected to replace the IDF’s veteran M113 APC.

The development and production of the Eitan is led by the Armored Vehicles Directorate at the Israel Ministry of Defense (IMoD), in cooperation with the IMoD Mission to the United States and the Directorate of Production and Procurement.

The Eitan will be manufactured simultaneously in more than 60 facilities in Israel and the United States. Each APC requires the production of approximately one million parts, including over 20 tons of steel, 30km of welding wire, 6 km of power and communication cable, and about 70 liters of paint. All the tools will be assembled at Development and Maintenance Center of the IDF’s Technical and Logistics Directorate.

The first Eitans will enter IDF operational service at the end of 2021.