‘Eitan’ – Tests completed for the most advanced APC in the world 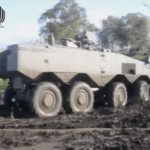 The Administration for Merkava and Armored Combat Vehicles in the Ministry of Defense, in cooperation with the Ground Forces and the Nahal Brigade, have completed a series of extensive tests on the “Eitan” armored personnel carrier.

The tests examined “Eitan’s” performance in difficult terrain in various areas of the country, from the Golan Heights to southern Israel, as well as its performance on the road. Continue Reading »

Both the Merkava MK4 Barack and  Eitan APC are designed with dozens of sensors to identify the enemy, and advanced defense systems such as the Trophy active protection system.
– Watch video clip.

Speaking at the Second International Ground Warfare and Logistics Conference at Latrun, west of Jerusalem, Matzliach said that Armored Corps combat teams will soon have a range of integrated vehicles, including the Merkava MK4 “Barack” (or Lightning) main battle tank that is currently being developed. Continue Reading »