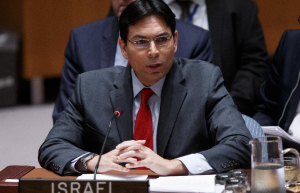 He accused Israel of “ignoring” the recommendations by the Middle East Quartet, comprising the U.S., Russia, the EU and the U.N., seeking to ensure a return to meaningful negotiations.

“Let me be clear: No legal acrobatics can change the fact that all outposts — whether ‘legalized’ under Israeli law or not, whether located on state land, or absentee land, or private Palestinian land — just like all settlements in Area C and east Jerusalem, remain illegal under international law,” Mladenov told the Security Council.

A statement by the Prime Minister’s Office (PMO) said Mladenov’s remarks “are distorting history and international law and are only pushing peace further away. … Jews have been living in Jerusalem and Judea and Samaria for thousands of years and they are not the obstacle for peace. The obstacle for peace is the Palestinians’ incessant attempts to deny the Jews’ link to their historical homeland, and their refusal to accept that [Jews] belong here.

Mladenov’s “statements indicated complete disregard to the facts on the ground. They push the chances of resolving the Israeli-Palestinian conflict further away and illustrate the U.N.’s hypocrisy when it comes to Israel.”

Danon stated that “the State of Israel will continue to build in Jerusalem, its eternal capital, just as other nations build in their capitals without seeking the U.N.’s permission. The U.N. should focus its attention on the real obstacle for a regional solution — the Palestinian refusal to denounce terrorism and resume the peace talks.”

Following Mladenov’s remarks, Palestinian envoy to the U.N. Riyad Mansour urged the Quartet and the international community to supervise Israel in its compliance with international law.

“We call upon the Security Council once again, and the Quartet, and the international community as a whole, that if your position is that the settlements are illegal and the major obstacle in the path of peace, then therefore it is your duty to tell us what are the practical steps that you are going to undertake in order to bring Israel into compliance with its obligation under international law and also under the provisions of the Charter of the United Nations,” he said.