Israel Defense Minister in U.S.: ‘We need an active America in the mid-East’ 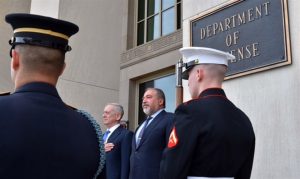 Israeli Defense Minister Lieberman told Secretary Mattis that the United States’ position is very important, and went on to stress, “We need an active America in the region.”

Defense Minister Avigdor Liberman met on Tuesday in Washington with U.S. Secretary of Defense, Gen. James Mattis. Liberman was received by an honor guard at the Pentagon and the meeting was held in a warm and friendly atmosphere.

During the meeting, Mattis and Liberman discussed all the security issues shared by Israel and the United States that are on the agenda, and discussed in depth the strategic issues in the Middle East, including Iran, Syria, Lebanon and other issues.

Liberman told Mattis that Israel views with concern the goings on in Lebanon by Lebanese President Michel Aoun, and particularly the fact that the Lebanese army has become part of the operating system of the Hezbollah terrorist group.

The two ministers agreed on the need to act to strengthen the moderate forces in the region and create a coalition to fight terrorism.

Lieberman told Secretary Mattis that the United States’ position, as it is currently expressed, is very important in order to remove obstacles that harm stability in the Middle East. “We need an active America in the region,” he stressed.

“The strategic cooperation between Israel and the U.S. is vital and crucial not only for the security of Israel, but for security and stability throughout the Middle East and this also has implications on global security,” said Liberman, who added that the axis of evil the world, as he put it, stretches from Iran to North Korea.