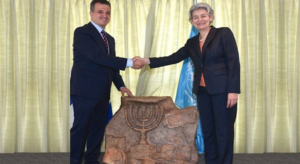 In response to #UNESCO‘s denials of history,🇮🇱presents replica from Arch of Titus proving Jewish Temple stood in Jerusalem 2000 yrs ago. pic.twitter.com/VQB7bwGfJl

The replica, created by Israel’s Antiquities Authority with prior agreement from the Italian holders of the rights to the monument, is an exact copy of a portion of the inside wall of the Rome landmark.

It depicts a triumphal procession by Roman soldiers returning from destroying the Second Temple in Jerusalem and exiling the Jewish people, carrying the Temple’s Menorah, among other ritual items.

The idea was devised by Prime Minister Benjamin Netanyahu, following the organization’s decision last year that failed to acknowledge Jewish ties to the Temple Mount or Western Wall.

Israel hopes the replica of the panel from the arch, which will be put on display at UNESCO’s headquarters, will serve as a reminder the Second Temple had in fact existed on the Temple Mount, a fact vigorously denied by the Arab states.

Carmel Shama-Hacohen, Israel’s envoy to UNESCO, presented the gift to Director Irina Bokova in a ceremony Tuesday at the organization’s Paris headquarters.

The ceremony was also attended by Chairman of the UNESCO Executive Board, Michael Worbs, as well as the envoys of France, Italy, Spain, the Netherlands and other countries.

“The Arch of Titus was not built by Jews or made to their specifications,” said Shama-Hacohen. “It is also not the result of a political vote led mostly by modern-day dictatorships, but a decision made in real-time some 2000 years ago by the Romans to glorify themselves and demean the exiled Jewish people.”

“Ever since, Jews have endeavored to never pass underneath it as it was a symbol of ruin and humiliation. It was a twist of fate, then, and an UNESCO absurdity, that it’s precisely this element that strengthens the position of Israel and the Jewish people as to their special historical bonds with the Temple Mount, the Wall and Jerusalem in general,” he concluded.

Only hours after a terror attack in Har Adar, Shama-Hacohen said decisions made against Israel in UNESCO “risk human lives.”The ambassador thanked Director Bokova several times in his speech for coming out against the anti-Israeli decisions, raising the ire of the organization’s Arab lobby.

“Knowledge is key in fighting any form of prejudice, hatred, xenophobia, racism and anti-Semitism—especially when those are bred on a bed of ignorance and on turning a blind eye to history,” Bokova said.