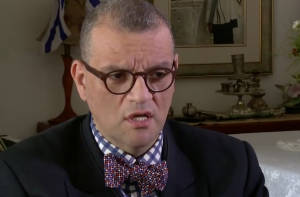 There are those who accuse Israel of being hostile toward Christians, but if that’s true, why do Palestinian Christians, or other minorities from neighboring Arab countries, seek shelter in the Jewish state?

To hear some of Israel’s antagonists speak one would think the Jewish state was hostile toward Christians.

Why then has a Christian leader dedicated to serving the Arab world sought shelter in Israel after having a price put on his head by ISIS?

Could it be that he, unlike Israel’s detractors, knows that the Jews and their army (called by many an “occupation force”) are a bulwark against the rising tide of Islam, and therefore a haven for Christians?

Canon Andrew White, dubbed the “Vicar of Baghdad,” spent years serving the Christians of Iraq, even under direct threat from radical Muslim groups.

But his outspokenness regarding the atrocities faced by Iraq’s Christians eventually earned White a spot at the top of ISIS’s “most wanted” list, and that’s when his superiors in the Church of England ordered him to get out.

“ISIS were threatening to kill me, they were after me,” White said in an interview with CBN. “They wanted that priest from England. So, the Archbishop of Canterbury said, ‘You’ve got to leave now.’ I can’t argue with the Archbishop of Canterbury, especially as he used to be my colleague.  We used to work together. So, I’m in Israel now. He wanted me to get out of Baghdad.”