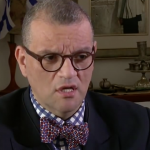 There are those who accuse Israel of being hostile toward Christians, but if that’s true, why do Palestinian Christians, or other minorities from neighboring Arab countries, seek shelter in the Jewish state?

To hear some of Israel’s antagonists speak one would think the Jewish state was hostile toward Christians.

Why then has a Christian leader dedicated to serving the Arab world sought shelter in Israel after having a price put on his head by ISIS?

Could it be that he, unlike Israel’s detractors, knows that the Jews and their army (called by many an “occupation force”) are a bulwark against the rising tide of Islam, and therefore a haven for Christians? Continue Reading »

Israel appoints a Christian Arab to supervise elections critical to the Jewish State.

By David Lazarus
For the first time in the country’s history, an Arab judge is chairing the Central Elections Committee presiding over today’s national elections.

Justice Salim Jubran (pictured) is a Christian Arab who grew up in the north of Israel. In 2004, he became the first Israeli Arab to be appointed a permanent seat on the Supreme Court.

Earlier this year, he was given the daunting task of overseeing all those hot-button, contentious and touchy election issues like who gets campaign funding, preventing voter fraud and determining what constitutes fair play in the rock’em sock’em world of Israel’s political propaganda wars.

Christian Spokesman: Calling on Israel to Stop Combating Terror Is Epitome of Hypocrisy

Israeli Christians says ‘Enough With Western Hypocrisy!’  The West should be supporting IDF for being the only army to oppose Islamic terror and protecting Christians in the Middle East.

By Israel Today Staff
Yesterday, we reported on a demonstration by Israeli Christians in solidarity with their persecuted Christian brothers and sisters in Iraq, and in support of the Israeli army that is now combating the same type of Muslim extremism in Gaza.

Following the demonstration, the spokesman for the Israeli Christian Recruitment Forum, which advocates young Christians join the IDF and which organized Sunday’s rally, made a powerful plea in an interview with Israel’s Channel One.

The growing movement of local “Arab” Christians who identify with Israel are now asking the state to establish an official school curriculum.

The Israeli Christians Recruitment Forum, which encourages young local Christians to join the Israeli army, is behind the new petition. Continue Reading »

Al-Qaeda Swears to Slaughter Christians After US Finishes in Syria

An Al Qaeda faction of the Syrian rebels that’s supported by the Americas, intend to kill the local Christians should they win.

While U.S. leaders continue pushing for war against the Syrian government, “Al-Qaeda-linked rebels,” reports AP, “launched an assault on a regime-held Christian mountain village in the densely populated west of Syria and new clashes erupted near the capital, Damascus… In the attack on the village of Maaloula, rebels commandeered a mountaintop hotel and nearby caves and shelled the community below, said a nun, speaking by phone from a convent in the village. She spoke on condition of anonymity for fear of reprisals.” Continue Reading »