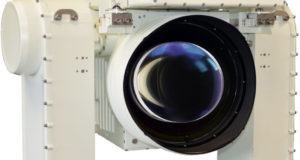 “Since its deployment, Sky Spotter has helped detect and track dozens of terror kites and incendiary balloons that have been flown from the Gaza Strip into Israel,” read a statement by Rafael Advanced Defense Systems provided to The Jerusalem Post.

Sky Spotter is an advanced Passive Early Warning system that includes sensitive optical sensors with command and control software for real-time monitoring of the sky and allows operators to identify objects from one kilometer to tens of kilometers away.

The primary source of input of the Sky Spotter system is the FLIR Wide Field of View (WFOV) sensor, which persistently monitors the landscape within its field of view, day and night. Any object that disrupts the constant scenery would be detected by the system, which then uses a set of image processing algorithms that can determine what the object is.

According to Rafael, the FLIR WFOV sensor is reinforced with Narrow Field of View (NFOV) multispectral investigation sensors that act as telescopes and allow the operator to zoom into targets to verify and track them.

Once a suspected target is identified, such as a kite or a balloon, the system’s control panel displays each one with a red dot. The information is then shared with firefighters who head to where the device landed in order to put out the fire before it spreads.

“When connected to Rafael’s Drone Dome (Rafael’s system for early detection and neutralization of small aerial targets, such as drones), the integrated system also enables interception of the targets using a high-power laser beam,” read the statement by Rafael.

The operator is able to manage up to four separate sensors at the same time, each with two channels, allowing them to track and manage multiple targets simultaneously.

Gazans have been protesting along the border with Israel since March 30 as part of what organizers have called the “Great March of Return.” Over 130 Palestinian protesters have been killed by IDF fire and thousands more injured.

Demonstrators have launched hundreds of kites, balloons and helium-filled latex condoms with incendiary and explosive devices on a daily basis into Israeli territory, sparking dozens of fires that have destroyed thousands of acres of farmland, parks and forests.

Israeli leaders have been split on how to respond to those launching the aerial incendiary devices, with some politicians calling on the IDF to shoot at those who launch them on site.

Other Israeli officials are concerned that if the arson attacks don’t stop it could lead to an escalation that would lead to another military operation against terrorist groups in the Hamas-run Gaza Strip.

The IDF has called in reservists to help civilian firefighters battle the flames and has carried out air strikes against empty vehicles used by those launching the kites as well as fired warning shots against cells launching the devices.