Noble Energy announced on Wednesday afternoon, that if the signed letter of intent progresses into a full-fledged deal, the Leviathan partners would likely deliver the gas supply across a border location between Israel & Jordan,

The 621-billion cubic meter Leviathan gas reservoir, off of Haifa, is expected to begin flowing in 2017. 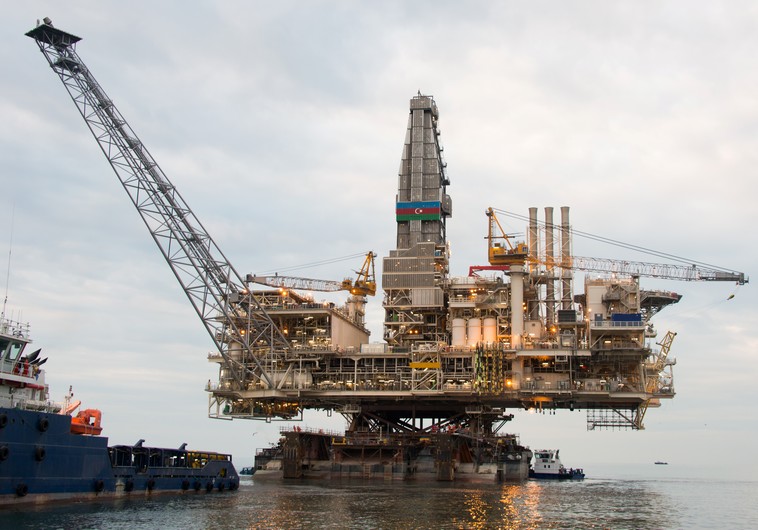 If the letter of intent progresses into a full-fledged deal, the Leviathan partners would likely deliver the gas supply across a border location between Israel and Jordan, Noble Energy announced on Wednesday afternoon. A final gas purchase and sales agreement is expected to be complete in 2014, but sales volumes will likely begin at a rate of 9 million cubic meters of gas daily, according to the Houston-based company.

Completion of the deal will be subject to the regulatory approvals of Israel and Jordan, among other conditions, Noble Energy stressed. In addition to the respective national governments, the parties are working in coordination with the United States Department of State, the firm added.

“We look forward to working with NEPCO and supporting economic prosperity across the region through development of these world-class energy resources,” said Keith Elliot, Noble Energy’s senior vice president for the Eastern Mediterranean, following Wednesday’s signing.

“This letter of intent and other recent regional export arrangements are advancing the first phase of development at the Leviathan project, which is being designed with capacity for 1.6 billion cubic feet [48 million cubic meters] of natural gas per day,” Elliot continued.

While Channel 2 reported that the deal is worth more than $15 billion, Noble Energy simply said that the price for the natural will be based primarily on linkage to Brent oil prices, and will be dependent on negotiations for a binding agreement.

The 621-billion cubic meter Leviathan gas reservoir, located about 130 km. west of Haifa, is expected to begin flowing in 2017. Noble Energy owns 39.66% of Leviathan, while Delek Drilling and Avner Oil – both subsidiaries of the Delek Group – each own 22.67 percent and Ratio Oil Exploration holds 15%.

Leviathan’s smaller, 282-b.cu.m. neighbor to its east, Tamar, began generating gas for the Israeli domestic market in March 2013. At Tamar, Noble Energy holds 36% of the basin. Delek Drilling and Avner Oil Exploration each own 15.625%, while Isramco owns 28.75% and Dor Gas owns 4%.

While the Israeli government approved an export policy in June 2013, capping exports to 40 percent of the country’s gas reserve quantities, the question has long remained to whom the developers will elect to sell the gas.

Initially, Cyprus and Turkey – the latter of which does not recognize the former’s sovereignty over the entire Cypriot island – were thought to be the most likely contenders to purchase gas from Israel’s reservoirs. Cyprus has long been courting Israel with liquefied natural gas (LNG) export options, while Turkey through a pipeline. During Operation Protective Edge, however, the Turkish energy minister made clear his country’s “door will be closed” until calm in the region would be achieved.

Empty liquefaction plants in Egypt have also grown to become an attractive option for Israeli gas. The British Gas Group signed a non-binding letter of intent with the Leviathan partners that could entail a 15-year supply of 105 b.cu.m. of natural gas to their Idku plant. Meanwhile, in early May, the Tamar reservoir partners signed a letter of intent with Spanish firm Union Fenosa, for the provision of 71 b.cu.m. to that company’s Egyptian liquefaction facility in Damietta.

In January, the Leviathan partners signed their first export deal for the larger basin – a $1.2 billion sales agreement with the Palestine Power Generation Company. According to the agreement, PPGC will buy around 4.75 b.cu.m. of gas for a period of 20 years, to fuel a future power plant in Jenin with a 200-megawatt capacity.

A month later, the Tamar reservoir partners signed a $500 million deal to provide 1.8 b.cu.m. of gas to the Jordanian firms Arab Potash and Jordan Bromine over 15 years, beginning in 2016, to power their Dead Sea facilities.

As far as such agreements are concerned for Leviathan in particular, Elliot stressed in his Wednesday statement that the reservoir partners “are making good progress on the marketing side.”

“We now have over 60 percent of Leviathan’s initial capacity and 80% of targeted initial sales volumes secured with letters of intent,” he said.

National Infrastructure, Energy and Water Minister Silvan Shalom welcomed the signing of the letter of intent between the Leviathan developers and the Jordanian national power corporation.

The signing, the minister stressed, occurred after many meetings held by Shalom and senior ministry officials with various government officials in Jordan.  Completion of the deal is subject to the approval of gas export from Israel, which will be made possible after a professional examination and with the final authorization of the minister.

“This is a historic act that will strengthen political and economic relations between Israel and Jordan,” Shalom said. “During this period, the State of Israel has become an energy superpower, which will fulfill the energy needs of its neighbors and will strengthen its position as a major factor in regional power supply – and I welcome that.”