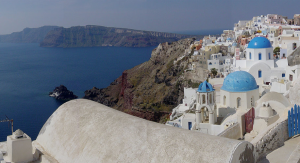 According to Greek Tourism Ministry, Israel is 1 of 4 non-EU nations whose tourists have been granted a 20% discount in Greek shops & businesses during 2016, after some 400,000 Israelis visited Greece in 2015.

Greece has always been a popular summer tourist destination for Israelis, and now it appears that vacationing there will cost Israeli passport holders even less. Thanks to a new initiative by Greece’s Deputy Foreign Affairs Minister Dimitris Mardas and Hellenic Confederation of Commerce and Entrepreneurship President Vassilis Korkidis, Greece is offering Israeli tourists a 20% discount in the country’s shops for the remainder of 2016.

Panoramic view of parts of old Corfu City, a UNESCO World Heritage Site, as seen from Palaio Frourio. The Bay of Garitsa is to the left and the port of Corfu is just visible on the top right of the picture. Spianada is in the foreground. – Photo: Marc Ryckaert(MJJR)/Wikipedia

According to the Greek Tourism Ministry, some 400,000 Israeli tourists visited the Hellenic Republic in 2015, mostly the islands closer to Israel. Some of the tourism benefited from recent tension between Israel and Turkey, another population vacation spot for which urgent travel warnings are in place.

Israel is one of four nations (along with Turkey, Russia, and the U.S.) whose visitors to Greece will enjoy the discount on the mainland and on the Greek Isles. The discount does not cancel out eligible value added tax refunds at the end of the vacation.

Most businesses welcomed the campaign, whose discount applies not only in stores but also to Greek airlines, tourism bureaus, and many other businesses.

The Greek Foreign Affairs Ministry has already announced which lucky countries will enjoy the discounted tourist rate in 2017: China, Iran, the Balkan countries, and all EU member nations.