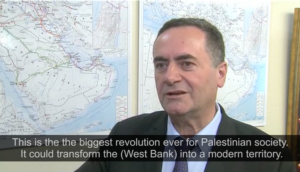 Transportation Minister Katz unveiled what could be an historic plan to give Jordan, Saudi Arabia and Iraq access to the Mediterranean through Israel’s ports, that would be a significant boost for the Jordanian and Palestinian economies.

Transportation and Intelligence Minister Israel Katz unveiled an ambitious plan on Wednesday to give Jordan, Saudi Arabia and even Iraq access to the Mediterranean through Israel’s ports in Haifa and Ashdod, in a plan called “Tracks for Peace.”

Under the plan, the Haifa to Beit She’an train link would be extended eastward to the border crossing with Jordan and southward to the Jenin area where the Palestinians could connect to it. Rail lines would be laid in Jordan to Irbid, and from there it would link with existing and planned lines extending north-south through Jordan, into Saudi Arabia and further east to the Persian Gulf.

Katz, at a press conference in Jerusalem to unveil the plan, said Prime Minister Benjamin Netanyahu asked him to present this plan to US envoy Jason Greenblatt when he was in the region last month. Greenblatt received the plan “enthusiastically,” Katz, who will be speaking at The Jerusalem Post Conference in New York on May 7, said.

Separately, in response to a question posed by the media regarding Gideon Sa’ar’s recent announcement that he was returning to politics in the Likud, Katz said he himself plans to vie for the Likud leadership when Netanyahu steps down. “The Likud has had four leaders until now, I plan to be the fifth,” he said.

The idea of turning Israel into a land bridge stems, Katz said, from the geographic fact that Israel is located at the meeting of three continents. “There is historic, security and economic logic to the plan,” he said.

On a security level, it would provide an answer to Iranian threats to close off the strategic Strait of Hormuz, because goods that are currently carried by ship via the Red Sea could be delivered overland through Israel.

Turkey, he said, is already using Israel as a land bridge, with 5,000 Turkish trucks landing by ferry at Haifa Port each year, and making their way to Jordan, Saudi Arabia and the Persian Gulf overland from Haifa to the Jordan River Crossing/ Sheikh Hussein Bridge, and from there further east.

Under the plan, Jordan would become a regional transportation hub connected to the Israeli rail system with access to the Mediterranean, and also have the potential to link up with the rail systems in Saudi Arabia, the Gulf states and Iraq to the east and southeast.

Furthermore, by linking up with Jenin, the network would provide a massive boost to the Palestinian economy, which then would have easy access markets both in the east through Jordan and Saudi Arabia and to the west through Israel’s ports to Europe.

“Beyond its contribution to Israel’s economy, to the Jordanian economy, which is under pressure, and to the Palestinian economy, the initiative will connect Israel economically and politically to the region and will consolidate the pragmatic camp in the region,” he said.

Katz added that the initiative will create alternative trade routes between east and west that will be shorter, faster, cheaper and safer, “especially in view of the Iranian threat to maritime routes in the Gulf and the Red Sea – through Iran’s Houthi proxies in Yemen.”

The minister said he has had talks on the matter with the Jordanians and Egyptians, as well as other Arab players in the region whom he would not name.

During the press conference, Katz did not address the recently reiterated refusal of the Arab League to normalize relations with Israel until an agreement is reached with the Palestinians.

The plan comes amid talk of a US initiative to convene a summit of regional states in the summer to re-launch Israel-Palestinian negotiations.

In addition to this plan, Katz, in recent months, also has brought a proposal to the security cabinet to construct an artificial island off the coast of Gaza that would provide the Strip access to the world, while allowing Israel to have security control over the goods and material going in and out of the island.