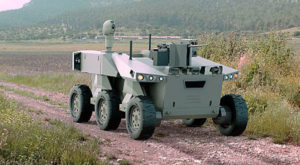 Meteor Aerospace’s newest UGV can operate in a variety of defense and homeland security missions, sustaining Israel’s position on the cutting edge of autonomous ground vehicles used for defense and intel acquisition.

Designed with a low silhouette for a range of defense and homeland security missions, RAMBOW can participate in a variety of missions such as ground warfare, intelligence gathering and logistical supply, as well as strategic facilities and border defense, with no risk to personnel.

According to a statement released by the company, “The RAMBOW is powered by a unique electrical drive system, integrating innovative power and autonomous driving technologies.”

The UGV has a rear bay which can carry up to 700kg and a forward mount which can carry a remote controlled weapon station (RWS) with a heavy machine gun, or other mission devices. It can carry a total payload weight of one ton and provides the operator with live video of its surroundings, using on-board cameras and a long range electro-optical payload mounted on a telescopic mast, which can be raised to 3.5 meters high.

“RAMBOW and its mounted systems are connected to and controlled by a remote control station via a wide band data link,” the statement continued.

The RAMBOW can drive autonomously along predefined routes, automatically detecting and avoiding obstacles using numerous on board sensors, reaching speeds of 50 kilometers per hour. It can also travel over 50km on its internal “silent” battery and over 160km using its on-board diesel generator which can charge the UGV’s batteries on the move.

The UGV uses a 6×6 electrical drive via special in wheel motors, with each wheel independently hydraulically suspended, and separately controlled by a drive by wire system. The independence of each wheel enables the vehicle to make on-the-spot turn maneuvers, negotiate a 60% forward slope and a 40% side slope, cross a 60cm ditch and overcomes obstacles as high as 40cm.

Meteor Aerospace, which was founded by former President and CEO of Israel Aerospace Industries Itzhak Nissan, develops defense systems, including unmanned systems for land, air and sea – including an unmanned naval vessel which can operate automatically for over 20 days – and long range precision strike weapon systems.

Unmanned ground vehicles have been a consistent feature of military operations since the beginning of the 21st century, with thousands deployed in conflict zones such as Afghanistan and Iraq. The IDF already operates UGVs for a number of missions such as border patrol and delivery and logistics missions. Israel is at the forefront in innovative and technologically advanced unmanned vehicles, with Israel’s Ministry of Defense Research and Development Agency recently unveiling a number of new unmanned systems aimed at allowing the IDF to outflank its enemies in all areas while minimizing the risk to soldiers confronting the enemy.

The Israeli RAMBOW is not the only unmanned vehicle on the market. Armies and states around the world have increased their interest in using robots for self-defense and a variety of field missions.

UGV’s are coming, said Alain Tremblay, who works for the German defense manufacturer Rheinmetall, while he proudly displayed the company’s own UGV in London.

The question of how wise it is to arm robots and also allow them a measure of autonomy is a valid one, he adds, but it has already been answered. Once we began to arm drones, said Tremblay, UGV’s are the next logical step.