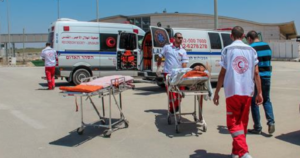 Photographs of the girl in her hospital bed have been widely circulated on social media.

A short thread on how to create lie and FakeNews using social media.

2 days ago Quds News Network has posted information about Aisha Lulu (al-Lulu) who died in West Bank hospital alone, because “Israeli siege” prevented her parents to go. While child death is terrible in any 1/ pic.twitter.com/rRQ3F1Gtrp

The Times of Gaza reported, that, ”Those who were around her said she died crying, unable to speak, and alone.”

The office of the Coordinator of Government Activities in the Territories said in a statement to the media that this story were not true.

“Contrary to reports, Aisha a-Lulu passed away in the Gaza Strip after having returned to her home approximately two weeks ago after surgery, which unfortunately did not succeed in the Al-Maqasid Hospital [in Jerusalem].”

Other news outlets, such as the Palestinian news agency WAFA, reported that a-Lulu had died in Gaza, but said that Israel had prevented her parents from accompanying her to Jerusalem for treatment.

According to WAFA, Minister of Health Mai Alkaila told reporters “How can a little child travel alone through Israeli checkpoints without being escorted by her mother, father or brother to provide her with affection and psychological support during treatment?”

“Aisha had to fight her disease alone, in a blatant disregard to international agreements, covenants and treaties on human rights, children’s rights, the right to health and access to health services in a safe manner,” the minister added.

COGAT debunked that report as well. “Israel approved the entry into Israel of the child Aisha a-Lulu for medical treatment in a hospital in East Jerusalem after her parents signed a waiver, according to which they did not wish to leave the Gaza Strip with her,” COGAT said.

So Cogat has clarified the situation and it turns out that the original narrative spread by Quds News Network is fully fake. Cogat had no issue to allow through, however the family refused to go to Jerusalem for their own reasons:
https://t.co/WafX4bVu2J

“We emphasize that CLA Gaza policy requires parents to escort their minor children for medical treatments, based on the understanding that children need their parents in moments such as these.

“However, in this case, Aisha’s parents did not wish to accompany her and therefore, in accordance with CLA policy, they were requested to sign a declaration that they choose not to escort their daughter during the course of her treatment, due to their own choice, and request that another party on their behalf escort her,” COGAT said.