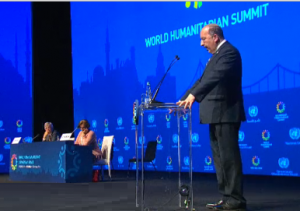 At the UN World Humanitarian Summit in Istanbul, Dr. Dore Gold spoke about Israel’s extensive role in providing humanitarian aid, noting the task is made more complicated when Gaza’s rulers confiscate aid sent to Palestinian civilians then uses it for Hamas’ military agenda.

Hamas is stealing 95% of the cement transferred into Gaza for the purpose of rebuilding homes so that it can use it for military purposes, Foreign Ministry Director-General Dore Gold said on Tuesday.

“From our own investigations we found that out of every 100 sacks of cement that come into the Gaza Strip [from Israel], only five or six are transferred to civilians,” Gold said as he addressed the UN World Humanitarian Summit in Istanbul.

“A hundred sacks is what is necessary to rebuild a home, the rest are confiscated by Hamas and used for military purposes,” he added.

He spoke about Israel’s extensive role in providing humanitarian aid, noting that the task is made complicated when those on the receiving end are also at war with his country, as is the case with Hamas, which rules over the Gaza Strip.

Hamas is “cynically exploiting” Israel’s help so that it can “rebuild its military capacity,” Gold told summit attendees.

Gold explained that Hamas is a terrorist organization with links to an ISIS affiliate organization in northern Sinai.

“Since October, Israel has let into Gaza 4,824,000 tons of building materials…but these have often times been seized and used to build new attack tunnels penetrating Israeli territory,” he said.

This puts Israel in a difficult situation, because the humanitarian assistance it provides for Gaza civilians also helps Hamas conduct terror attacks against it, Gold said.

“Israel firmly believes in the importance of humanitarian relief toward our neighbors, even those with whom we were at war,” Gold said.

He noted that Israel has also taken in thousands of wounded Syrians. It has placed a field hospital on the Golan Heights and has treated Syrians in its northern hospitals, he said. Similarly the hospitals in the south have treated people from Gaza, including close relatives of Hamas members, Gold said.

Israel is a small country, but it has been at the forefront of humanitarian aid around the world and “plans to remain so in the future,” Gold said. He recounted the assistance it has given to a host of countries, including Rwanda, Turkey, Haiti, Philippines and Nepal.

In 2015, Israel was the largest donor per capita to the UN’s Ebola response fund, he said.

He gave a plug instead to the idea of regionalized process, but did not specify if he was referring to any actual only going plan.

“We in the Middle East, however, understand what must be done,” Gold said. “We welcome the regional efforts underway by several of our neighbors to support negotiations.”

He added that the best way, however, to resolve the conflict was through direct talks with the Palestinians. It was such direct negotiations that brought about peace treaties with Egypt and Jordan, he said.

Gold also took issues with “unfair” charges that Israel was trying to “drive Palestinians out” of Area C of the West Bank.

“The facts that are made in these vicious charges against Israel are simply untrue,” he said.

“Israel will continue to adhere to humanitarian standards despite the security risks and unfair political pressures it has to face,” he said.

Israel, he added, will continue to make peace with its neighbors “as it did before and as it continues to try to do to this very point in time.”