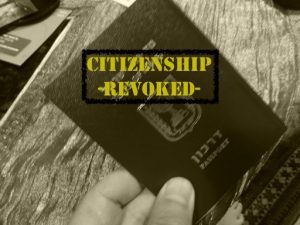 Israel’s Interior Minister ordered citizenship immediately revoked to a Palestinian who planned a massive terror-attack on an event hall, planned the kidnapping of an IDF soldier, and worked with Gazans that were in Israel illegally.

Interior Minister Aryeh Deri ordered on Thursday evening that the citizenship of terrorist Hani Abu Omra be revoked. Abu Omra lives in Tel Sheva. He and his terror cell planned to carry out a large-scale terror attack on an event hall in southern Israel.

Abu Omra has had a temporary resident A-5 visa since 2000, since he is married to an Israeli citizen. As noted, Interior Minister Deri ordered his citizenship immediately revoked.

Deri said “a situation in which citizens use their status to commit terror attacks against Israeli citizens is something I intent to fight with a total and relentless war. I will take any steps necessary and use all available legal means to counter these hazards.”

On Thursday afternoon, members of a terror cell preparing for a large terror attack in a southern event hall were arrested by the ISS and the police force’s Negev Central Unit.

In addition, the terror cell planned to kidnap and murder a soldier for use as a bargaining chip.

A month ago, Mahmoud Youssef Hasin Abu Taha, a resident of Khan Yunis in the Gaza strip, was arrested when he attempted to cross into Israel for commercial purposes.

During the ISS (Shabak)’s investigation, it was discovered that Abu Taha headed an Islamic Jihad terror group in Gaza and had planned to carry out several attacks. Shabak also found out Abu Taha was recruited to ISIS by Wail Soufian Abu-Taha, a Gaza resident who was a senior member of Islamic Jihad. Wail Soufian Abu-Taha put Mahmoud Abu Taha in charge of the organization’s military infrastructure and planning terror attacks.

Mahmoud Abu Taha wasted no time, and quickly recruited three more partners. One of them, a Gaza resident who was in Israel illegally, worked in the event hall they planned to attack.

To further their terror activities, the cell leader and the event hall employee did a pre-attack survey of the hall and its grounds. They then revised their original plan, to maximize the number of victims in the attack.

At the same time, Abu Taha planned to carry out a bargaining attack, in which he would kidnap and kill an IDF soldier. He received thousands of shekels to fund this attack, which were used to rent an apartment in Israel for use in the kidnapping. Abu Taha planned to murder the soldier in the apartment, bury his body in the area, and transfer the soldier’s belongings to Gaza for use in bargaining with Israeli authorities.