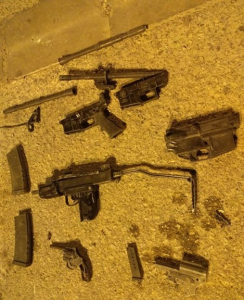 According to an IDF spokesperson, the suspects included three members of the Islamic Jihad terror group and two members of Hamas. An additional four terrorists were not tied to a specific terror group.

In a separate operation conducted by the IDF, Border Police, Israel Police, and Shin Bet security agency, security forces shut down a makeshift office for funding and inciting terror attacks. Thousands of shekels in cash were confiscated, along with a computer and written materials.

Also overnight, a third operation by the IDF and Border Police uncovered a weapons factory in the Jenin region. Dozens of guns and gun parts were confiscated.