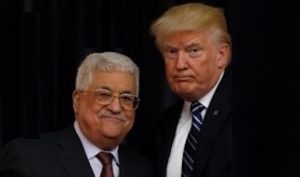 He stressed that while Trump was on the right track in forging a global coalition to combat Islamic terrorism, that effort had to include cutting funding to bodies that encourage jihadist violence, like the Palestinian Authority.

[Palestinian leader Mahmoud] Abbas is sending a message to children growing up in the PA that terror pays. The US needs to stop funding the PA, so long as Abbas is paying terrorists. Not one cent of American taxpayer money should be going to fund terrorists.

Today, more and more leaders are coming to understand that terror is terror, whether it hits the US, England, Egypt, or Israel. We have taken a number of steps that have led to a decrease in terror incidents: The fight against incitement on social media, the removal of legal status from inciting organizations such as the Muslim Brotherhood, and the uncovering and drying up of sources of terror funding.

The time has come to apply these steps to the whole world, and to establish an international coalition in the war on terror and the incitement driving terror. A global challenge requires a global response. Israel is ready to take a central role in leading the new coalition.