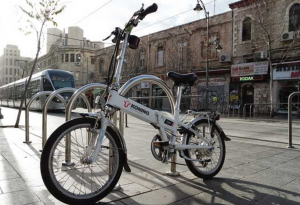 Since all of Israel is smaller than New Jersey, the Jewish State is a particularly good market for electric vehicles.

The motorized scooter, with chrome gleaming in the sun, is mounted on a turning platform. Visitors to the fourth annual Fuel Choices Summit stop and take selfies with the gleaming futuristic-looking bike.

“This is the Inu, which means dog in Japanese, and it’s your best companion in the city,” Ori Dadoosh, the CEO of Green Ride told The Media Line. “It’s a two-wheeled smart electric scooter that folds form the regular scooter position to a suitcase position so you can take it with you to your office or to a coffee shop.”

The Inu responds to voice commands like “fold” and “open”, and is connected to your smartphone. The scooter can go between 15 and 25 miles on one charge, usually more than enough for a daily commute within the city.

“When you approach the vehicle it recognizes you and the vehicle computer and the smartphone connect,” Dadoosh said. “You don’t need a key, you see all the information on a display and you control the smartphone from the handlebars you can answer calls you can even do selfies.”

The scooter will cost between $3000 and $5000 depending on the type of battery. The target market is Tel Aviv, where traffic is snarled much of the day. He said that almost 50 percent of the world’s population lives in cities, and traffic in almost all of them wastes time and resources.

RELATED:
There were dozens of new smart products on offer at the Fuel Choices Summit. The summit is meant to spark a “dialogue about the world’s most forward-thinking approaches to transportation, cutting edge technologies and future business models, and to promote Israel’s ambitious goal of reducing 60% of the country’s oil consumption by 2025.”

Some of the products on offer seem more far-fetched than others. Omer Bar-Yohay, the CEO of EViation, introduced an all-electric six-person air taxi with a 600-mile range.

“For the first time in history, the changes in technology, manufacturing, aerodynamic design and batteries is making the concept of an electric aircraft possible,” Bar-Yohay told The Media Line. “Because it is electric, you can put your propellers wherever you want, and the motor is much smaller.”

The aircraft, which will cost about a million dollars each, are meant to be used as commuter planes. Eventually, he said, it could go driverless.

Israel launched the Fuel Choices Initiative in 2011 to dramatically reduce dependence on oil.

“We see a unique opportunity for a revolution in transportation,” Eyal Rosner, the Chairman and Director of Administration of the Fuel Choices Initiative said. “Current global processes provide an opportunity ripe for change: the growing awareness of the geopolitical strategic need to reduce reliance on oil as the sole source of energy in transportation; a desire and urgency to reduce pollution and combat global warming; and technological advances that in recent years have gained momentum and are changing our perception of transport.”

Many in the field also expect that more vehicles will become driverless. In Finland, two self-driving mini-buses carrying up to twelve people, have begun a month-long trial in Helsinki. Unlike most of the world, Finland does not require vehicles on public roads to have a driver.

Many of the exhibitors in Israel said that Israel is a particularly good market for electric vehicles because the entire country is smaller than New Jersey. At the same time, Better Place, a company that offered electric cars and battery-switching stations went bankrupt in 2013 after selling just 1500 cars in Israel.

Nanjing, a city of eight million in eastern China, already has thousands of electric buses. Better Place has adapted its technology to the Chinese market and will offer battery switching for these electric buses.