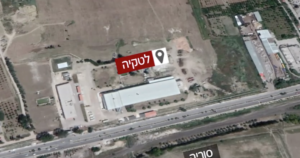 According to the report, Israel discovered that the factory was built in the outskirts of Latakia, a port city located near the Russian Khmeimim Air Force base. The Syrian government and Hezbollah reportedly assisted Iran in constructing the factory.

The missile parts were reportedly ordered from Italy, China and other Asian countries through companies established by Syria’s Scientific Studies and Research Center (SSRC).

The move was the latest show of military might by the country as it celebrates the 40th anniversary of the Islamic Revolution at a time of heightened tensions with the United States.

The surface-to-surface missile — called Dezful — is an upgrade on the older Zolfaghar model that had a range of 700 kilometers (435 miles), aerospace commander Brigadier General Amirali Hajizadeh said.

The new weapon was revealed after Iran on Saturday said it had successfully tested a new cruise missile named Hoveizeh with a range of 1,350 kilometer.

The facility’s location was not specified and pictures published by Sepah News showed only the two commanders in a room examining the missile.

“Displaying this missile production facility deep underground is an answer to Westerners … who think they can stop us from reaching our goals through sanctions and threats,” Jafari was reported as saying.

“Europeans talk of limiting our defensive capability while they have the audacity (to allow) their offensive power be used to attack innocent people all over the world,” he added.

Hajizadeh said the new missile had a “destructive power” twice that of the Zolfaghar version, which Iran used for the first time in October to strike a jihadist base in Syria.

“Iran’s blatant disregard for international norms must be addressed,” US State Department deputy spokesman Robert Palladino said in a statement on Thursday in response to reveal.”We must bring back tougher international restrictions to deter Iran’s missile program,” he added.

“The United States will continue to be relentless in building support around the world to confront the Iranian regime’s reckless ballistic missile activity, and we will continue to impose sufficient pressure on the regime so that it changes its malign behavior – including by fully implementing all of our sanctions,” he continued.

Iran and the other signatories have stuck by the 2015 nuclear agreement, although some European governments have demanded an addition to address Tehran’s ballistic missile program and its intervention in regional conflicts.

In September, Israel Defense Forces (IDF) issued a rare statement confirming they struck a Syrian military facility near Latakia “from which systems to manufacture accurate and lethal weapons were about to be transferred on behalf of Iran to Hezbollah in Lebanon.”

A Russian military plane carrying 15 servicemen was shot down by Syrian anti-aircraft fire trying to repel the Israeli assault, causing a diplomatic spat between Jerusalem and Moscow.

Russian simulation showing the downing of one of its military planes over Syria, for which Moscow blames Israel.

Russia blamed Israel for the downing, saying the Israeli air force failed to notify Moscow in time about the airstrikes.

Iran responded by firing a land to land missile toward Israel’s Golan Heights, which was shot down by Israel’s missile defense system.

A week earlier, former Chief of Staff Gadi Eisenkot told The New York Times that Israel struck over 1,000 Iranian targets in Syria in the last two-and-a-half years since identifying a pointed strategy by the Islamic Republic to expand its influence in the region.

“We struck thousands of targets without claiming responsibility or asking for credit,” Eisenkot said.

The decorated commander decided to implement his “Dahiya doctrine” or “the campaign against wars” that aims to wear down an enemy over a longer period of time in order to prevent the onset of a full-scale war.

The thinking led Eisenkot to become the first bold enough to take the Islamic Republic head on instead of merely focusing on targeting the Lebanese-based militant group Hezbollah’s activities in Syria.

Iran poured some $16 billion into Syria over seven years, according to Israeli assessments, which contributed to Israel’s strategy at the start of 2017 to perform near-daily attacks.

“We operated under a certain threshold until two-and-a-half years ago, and then we noticed a significant change in Iran’s strategy. Their vision was to have significant influence in Syria by building a force of up to 100,000 Shiite fighters from Pakistan, Afghanistan and Iraq. They built intelligence bases and an air force base within each Syrian air base. And they brought civilians in order to indoctrinate them,” he told The Times.

AFP contributed to this article