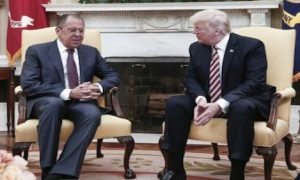 US President Donald Trump (R) and Israeli Prime Minister Benjamin Netanyahu at the White House in February. The pair will meet again next week in Israel – Screenshot: White House/YouTube

In a shock twist, the information from the close US ally had not authorized Washington to share it with Moscow, a potential blow to intelligence relationships based on trust that secrets will be kept.

Israel is a major intelligence collector in the Middle East and one of Russia’s closest allies, Iran, is one of Israel’s primary rivals.

However, Israel’s envoy to the US, Ron Dermer, emailed a statement to the Times, assuring that the two countries would maintain a close counter-terrorism relationship.

“We appreciate the strong relationship that we have with Israel with respect to intelligence sharing,” stated Spicer.

However, the Prime Minister’s office and foreign ministry declined to comment on both the Times report and the status of his arrival on May 22.

Just a week prior to Trump’s inauguration in January, investigative journalist Ronen Bergman reported in Israeli daily Yediot Ahronot that US officials under the Obama administration warned their Israeli counterparts against sharing classified information with the then President-elect, saying they believed Putin to have “leverages of pressure” over Trump.

The Americans implied that their Israeli colleagues should “be careful” following Trump’s inauguration, according to Bergman.

Further intelligence concerns should information be leaked by Trump to Russia, were that the information would potentially be passed on to Iran, whose intelligence officials are closely tied.

Israel is not just afraid of Russia, said Bergman, but also of Iran, who has been Israel’s primary threat.

Trump’s national security adviser on Tuesday denied the US president had caused a “lapse in national security” following the reports that he disclosed highly-classified information about the Islamic State group to Russian officials, insisting that what was revealed in the talks was “wholly appropriate.”

“The premise of that article is false, that in any way the president had a conversation that was inappropriate or that resulted in any kind of lapse in national security,” National Security Advisor H.R. McMaster told a White House briefing.

Asked about concerns Trump could have jeopardized US intelligence relationships by sharing with Russia information supplied by an ally, McMaster responded: “I’m not concerned at all. The conversation was wholly appropriate.”

He then revealed that Trump was not briefed on the source of the information shared with Russian Foreign Minister Sergei Lavrov and Moscow’s ambassador to the US, Sergey Kislyak.

With the US and White House media blocked only a Russian photographer was allowed to capture the meeting between US President Donald Trump and Russian Foreign Minister Sergei Lavrov  – Photo: HO/RUSSIAN FOREIGN MINISTRY/AFP

Meanwhile, several EU countries expressed their own concerns over disclosing certain intel with the US president in the future.

A senior European intelligence official told the Associated Press Tuesday that his country may stop sharing information with the United States following the allegations.

Doing so “could be a risk for our sources,” he told the news agency.

The official nor the country were named as he was not authorized to speak publicly on the matter, said AP.

A senior German lawmaker also expressed grave concern in reaction to the report.

“If it proves to be true that the American president passed on internal intelligence matters that would be highly worrying,” said Burkhard Lischka, a chair on the German parliament’s intelligence oversight committee, in a statement to AP.

He further noted that Trump has “exclusive and highly sensitive information including in the area of combating terrorism.”

If the US president reveals such information to other governments “at will, then Trump becomes a security risk for the entire western world,” said the German Social Democratic Party lawmaker, whose country relies heavily on US intelligence, reported AP.

According to an explosive report from the Washington Post on Monday,Trump revealed highly classified information on the Islamic State group during a meeting last week with Russian Foreign Minister Sergei Lavrov and Moscow’s man in Washington Sergey Kislyak.

The Post, citing unnamed officials, said Trump went off script during the meeting, describing details about an Islamic State terror threat related to the use of laptop computers on airplanes, revealing the city where the information was gathered.

The White House has been scrambling to rebut the claims.

National Security McMaster denied the president revealed “intelligence sources or methods,” but acknowledged that Trump and Lavrov “reviewed a range of common threats to our two countries, including threats to civil aviation.”

“There’s nothing that the president takes more seriously than the security of the American people,” refuted McMaster.

“The story that came out tonight as reported is false,” he added, without elaborating on which elements were wrong.

Trump insisted Tuesday he had the right to share “facts” with Russia, and wrote on Twitter that he was motivated by “humanitarian reasons,”

“Plus I want Russia to greatly step up their fight against ISIS & terrorism,” he tweeted.

The US leader’s disclosure of classified information did not break the law, according to the national security blog Lawfare, but such revelations could expose sources and methods and “substantially harm” US intelligence gathering partnerships with foreign governments.

“This is perhaps the gravest allegation of presidential misconduct in the scandal-ridden four months of the Trump administration,” the blog said. “This story is likely to be immensely consequential.”

The revelations are the latest in a wave of crises to hit the White House, which late Monday was in a state of shock, with aides frantically trying to put out the fire and determine the source of such damaging leaks.

“I have been asking Director Comey & others, from the beginning of my administration, to find the LEAKERS in the intelligence community,” Trump tweeted Tuesday.

Since coming to office in January, Trump has lurched from crisis to crisis, lampooning the intelligence services, law enforcement and the media along the way.