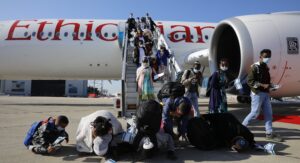 Hundreds of new immigrants arrive in Israel from Ethiopia on the 1st flight of “Operation Zur Israel” (“Rock of Israel”).
– PM Netanyahu: “I can’t remember being so moved by such a distilled sight of Zionism… Welcome to the State of Israel! The Ethiopian community is returning to the motherland, step by step.”

Hundreds of members of the Jewish community in Ethiopia arrived in Israel Thursday morning as part of Operation Rock of Israel which aims to reunite families and their relatives who have immigrated to Israel in the past.

Thousands of people with Jewish roots waiting in Ethiopia to come to Israel, 2,000 of which are expected to arrive in the Jewish state by January 2021, despite the COVID-19 pandemic and the recent outbreak of war in the northern Tigray region.

This morning Ethiopian olim arrived in Israel. We join the Government of Israel & @JewishAgency in celebrating this historic event & welcoming the group to their homeland. Jewish Agency head @Isaac_Herzog took a moment at the airport to share this with us. https://t.co/nQjMaHDX9b pic.twitter.com/Ngcoj1dJQU

Some 316 members of the Falash Mura community – accompanied by the country’s first-ever cabinet member of Ethiopian descent, Immigration and Absorption Minister Pnina Tamano-Shata – touched ground in Ben Gurion Airport, with many waving flags or stopping to kiss the ground as they streamed off the aircraft onto a red carpet. Many were dressed in traditional Ethiopian robes, and many women held babies in their arms. Festive Hebrew songs were blasted over loudspeakers. 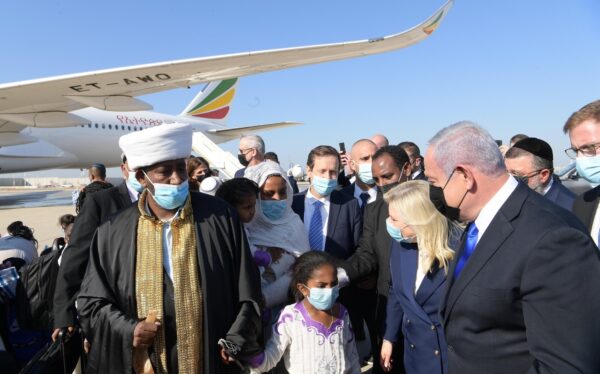 PM Benjamin Netanyahu, his wife Sara, Jewish Agency Chairman Isaac Herzog and  other Israeli dignitaries are among those welcoming the first group of immigrants from Ethiopia. – Photo: Amos Ben-Gershom, GPO

“I can’t remember being so moved by such a distilled sight of Zionism which demonstrates all our qualities,” Prime Minister Netanyahu said. “The sight of olim [immigrants] getting off the plane carrying baskets as I remember from my childhood, touching the ground of the Land of Israel, a mother kissing the ground. This is the essence of the Jewish and Zionist story and that is why, our brothers and sisters, we are excited to welcome you here. Welcome to the State of Israel… The Ethiopian community is returning to the motherland, step by step.”

One hundred more Ethiopian Jews are set to touch ground in Israel on Friday.

Community activists have accused the government of dragging its feet in implementing a 2015 decision to bring all remaining Ethiopians of Jewish lineage to Israel within five years. Netanyahu’s Likud party repeated that pledge before national elections early this year. 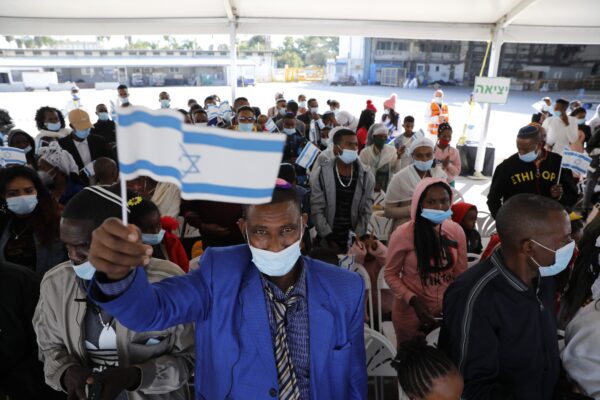 316 olim (‘New’ immigrants) arrived in Israel from Ethiopia on the 1st flight as ‘part one’ of “Operation Zur Israel.” – Photo credit: Olivier Fitoussi, courtesy of The Jewish Agency for Israel

The Struggle for Ethiopian Aliyah, an activist group promoting family unification, estimates some 7,000 Ethiopian Jews remain behind in Ethiopia, some of whom have been waiting for years to join their families.

“Once again, the government led by Prime Minister Netanyahu has decided to place quotas on the immigration of Jews from Ethiopia,” said Muket Fenta, an activist who has been fighting for over a decade to bring his aunt to Israel.