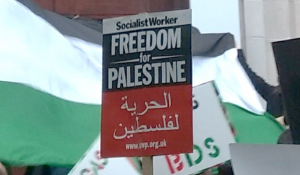 Despite being recognized terrorist organizations in the country is not enough to warrant police intervention when the two groups were recently involved in several events and demonstrations held in Berlin.

German and Israeli politicians banded together on Monday to call for a crackdown on the activities of Hezbollah and the Popular Front for the Liberation of Palestine (PFLP) in Germany.

Despite being recognized terrorist organizations in the country, the two groups were recently involved in several events and demonstrations held in Berlin, like June’s Al-Quds march.

In a letter sent to German Interior Minister Thomas de Maizière, quoted by the German daily Tagesspiegel the cross-party collection of politicians demanded that these events be banned.

“It cannot be that terror organizations in Germany advertise events, that such organizations recruit supporters and the responsible authorities do not have the legal possibilities to stop these events. Now it’s time for actions,” read the letter.

Beck, who together with Shai heads the German-Israeli parliamentary friendship group, stressed that support for their demand comes from “all camps in the Knesset and all factions of the Bundestag.”

The PFLP, like Hezbollah, is recognized by the European Union as a terrorist organization. The secular Palestinian Marxist–Leninist group was responsible for several airplane hijackings in the 70s and multiple suicide bombings in the early 200’s. One of its most significant actions in recent years was an attack on a synagogue in Jerusalem in 2014, where four worshipers and a policeman were killed using axes, knives, and a gun.

According to Tagesspiegel, a charity event for the PFLP was recently organized in Berlin by the Democratic Committees of Palestine. The event, planned for July, was also set to mark the 45th anniversary of the death of the PFLP’s former spokesman Ghassan Kanafani, who was reportedly assassinated by the Mossad in 1972. The gathering was eventually canceled, with organizers blaming the “Zionist lobby”.

Another PFLP event in December last year, to mark the 49th anniversary of its founding, that was to be held at a left-wing publishing house in Berlin, had to change venues after public outrage caused the property manager to withdraw permission, noted the Tagesspiegel.

“The PFLP calls for the destruction of Israel through terror, there is no justification for this,” wrote Beck in July, demanding the authorities take action.

“An event by an organization that sees the murder of Jews as a political means is intolerable,” he added.

Local authorities claimed then that they are unable to intervene, since the fact that the organization is included in the EU terror list is not enough to warrant police intervention. Without a federal ban on PFLP, their hands are tied, explained a spokesperson for the Berlin Senate.

In their joint letter, the German and Israeli politicians requested firmly that Interior Minister de Maiziere takes the necessary steps to prevent such events in the future. “We ask you to review to which extend a ban on these associations would be possible, but in any case, to prohibit them from promoting those measures [terrorism] in individual states.”