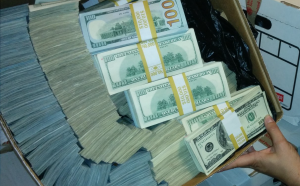 Israeli authorities are investigating possible donor fraud by an Arab association which allegedly posed as a nonprofit group while funding a Palestinian terrorist organization.

A Popular Front for the Liberation of Palestine (PFLP) rally in Gaza [Archive] – Photo: AP

The Registrar of Associations in Israel is reportedly pursuing the liquidation of the east Jerusalem-based “Lajnat al-Amal al-Zarai,” or the Committee of Agricultural Work, for allegedly funneling millions of dollars to the Gaza Strip-based Popular Front for the Liberation of Palestine.

The alleged donor fraud was uncovered by the International Legal Forum, headed by attorney Yifat Segal.

According to ILF findings, the CWA defrauded foreign entities and individuals into thinking they were donating funds for humanitarian relief in the Gaza Strip, but instead the funds were diverted to terrorist activities

“The Committee of Agricultural Work has been using its RAI certification to approach foreign governments, entities, and individuals and raise funds for the PFLP, and is thereby indirectly funding terrorism,” a letter sent to the Registrar of Associations in Israel by the ILF said.

The RAI’s reply said an initial investigation has “revealed suspicions that the CAW has failed to adhere to the Amutot [nonprofit organizations] Law of 1980. The issue has been forwarded for additional review and pursuing the association’s liquidation.”

“There is great importance in exposing the systemic failures that allow the intolerable ease with which this association — and others — operate and exploit the [Israeli] system to promote hatred and violence,” Segal said.