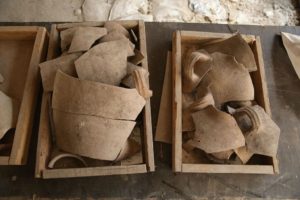 Other artifacts which attest to Jerusalem’s affluence prior to the Babylonian assault on the city 2,600 years ago. – Photo: COURTESY OF ELIYAHU YANAI/CITY OF DAVID ARCHIVE

Artifacts from the City of David, an archaeological park located outside the Old City and in the middle of the Palestinian neighborhood of Silwan, show charred wood, grape seeds, pottery, fish scales, and bones.

The remnants were found after being delicately extricated from collapsed layers of stone.

The findings may help prove the ancient city’s affluence and trade network. Jerusalem was once the capital of the Judean Kingdom, before being conquered and burned down by the Babylonians more than 2,600 years ago.

Other excavation findings include dozens of storage jars which likely stored both grain and liquids, several of which had stamped handles indicating ownership.

Some of the seals discovered depict a rosette – a petalled rose, the City of David said in a press release.

According to Ortal Chalaf and Dr. Joe Uziel, Israel Antiquities Authority excavation directors: “These seals are characteristic of the end of the First Temple Period and were used for the administrative system that developed towards the end of the Judean dynasty. Classifying objects facilitated controlling, overseeing, collecting, marketing and storing crop yields. The rosette, in essence, replaced the ‘For the King’ seal used in the earlier administrative system.”

Chalaf and Uziel added that the findings show that ancient Jerusalem extended far beyond the city walls, a sign of the capital’s wealth and security.

“The wealth of the Judean Kingdom’s capital is also manifest in the ornamental artifacts surfacing in situ. One distinct and rare finding is a small ivory statue of a woman. The figure is naked, and her haircut, or wig, is Egyptian in style. The quality of its carving is high, and it attests to the high caliber of the artifact’s artistic level, and the skill par excellence of the artists during this era,” the two directors added.

The City of David archaeological project is operated by Elad, which is a right-leaning organization. Elad seeks to help Jewish settlers move into Arab neighborhoods of east Jerusalem.

A number of left-leaning NGOs, including Ir Amim, have gone to court in order to cancel the contract between Elad and the Israel Nature and Parks Authority. The court did order some changes but renewed the contract.