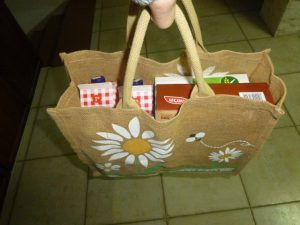 The 10 agorot (2.6 US cents) fee for plastic bags starts January 1, 2017 in supermarket chains nationwide, but for 3 weeks only, free reusable grocery bags will be handed out at the supermarkets from the last week of December until the end of the 2nd week in January.

After years of trying to minimize the use of plastic shopping bags that cause harm to the environment, a country-wide law will come into effect in January which will force Israeli consumers to pay for each plastic bag they use at the grocery store.Starting on January 1, 2017, any disposable plastic bags used to bag purchases at grocery store chains will cost 10 agorot.

The Ministry of Environmental Protection has allocated NIS 30 million for retailers to distribute reusable canvas grocery bags to consumers according to how much they purchase.

The ministry will pay for the bags via the 10 agorot tax.”It’s important for us to give the public an alternative (to the plastic bags currently in use) and provide it with funding from the government, and not force the average citizen to pay for the change,” said Environmental Protection Minister Ze’ev Elkin.

He added that “this bag law is imperative for minimizing the huge environmental damage caused by these bags. Similar legislation exists in almost every single other Western nation.”

The original regulation set price for plastic bags was to be half a shekel, but was reduced. As a result, environmentalists worry that this added tax won’t be enough to dissuade the public from using plastic bags.

“Plastic bags turn into garbage and pollute the environment, particularly open areas and the ocean,” the Ministry of Environmental Protection said.

The law only affects grocery stores, and not markets or corner stores, nor does it apply to clothing stores. Produce bags in supermarkets will also not be subject to the new tax.