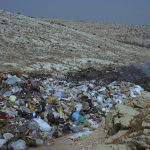 The Supervisory Unit of the IDF Civil Administration in Judea and Samaria confiscated a Palestinian Authority truck Monday after the truck was caught dumping garbage at an illegal waste disposal site between Alfei Menashe and Karnei Shomron. In the last two weeks two other PA trucks were impounded for similar offenses.

The illegal site began to be used for dumping recently after the Civil Administration closed another illegal site next to Qalqilya. Continue Reading » 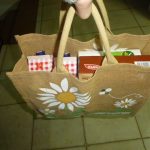 The 10 agorot (2.6 US cents) fee for plastic bags starts January 1, 2017 in supermarket chains nationwide, but for 3 weeks only, free reusable grocery bags will be handed out at the supermarkets from the last week of December until the end of the 2nd week in January.

After years of trying to minimize the use of plastic shopping bags that cause harm to the environment, a country-wide law will come into effect in January which will force Israeli consumers to pay for each plastic bag they use at the grocery store.Starting on January 1, 2017, any disposable plastic bags used to bag purchases at grocery store chains will cost 10 agorot.

Hebrew University of Jerusalem decides to use only recycled paper

The new initiative will boost the Israeli recycling economy, reduce environmental waste and will include employment of the disabled, said Dr. Meni Neuman, the project overseer.
• To reduce waste, the University will soon promote printing on 2-sided paper.

Hebrew University in Jerusalem is going green: this week every department in the university switched to using recycled paper.

Hebrew University is the first Israeli university to implement the eco-friendly initiative.

Manager of the Jerusalem Botanical Gardens on Mount Scopus Dr. Meni Neuman oversaw the new initiative. Neuman says adopting the use of recycled paper is a significant statement and is a testament to Hebrew University’s role at the vanguard of environmental preservation: “People often do not see the connection between their day to day activities and the effects they have on the environment.

Israel to legislate the end of plastic bags in supermarkets

In order to prevent further pollution, the Environmental Protection Ministry is drafting a law that bans distributing plastic bags in chain stores.

Plastic bags have long been part of the Israeli landscape — for better or (mostly) for worse. In fact, Israelis are practically addicted to these bags, with every citizen consuming some 275 plastic bags on average a year, playing their part in polluting the environment. But now the Environmental Protection Ministry aims to put a stop on this: The office is drafting a bill that will prohibit retail chain stores do distribute free plastic bags.

By REUTERS
Environmental Protection Minister Amir Peretz flew to Istanbul on Wednesday, becoming the first Israeli cabinet minister to visit Turkey since ties ruptured in 2010 over a deadly raid on a Gaza-bound flotilla.

Confirming a report on Israel’s Channel 2 television, the official said Peretz was the highest-ranking Israeli in Turkey since ties soured after IDF commandos killed nine Turkish activists three years ago when their vessel violated an Israeli blockade on Hamas Islamist-ruled Gaza.

NGO and IDF Prevents Environmental Catastrophe by Arabs in Samaria

The Israel Civil Authority, along with the assistance of the IDF have cleared out 20,000 cubic tons of garbage from an illegal Arab dump in Samaria.

The Civil Authority and the IDF has cleared out 20,000 cubic tons of trash from an illegal Arab dump in Samaria, after ongoing appeals from an environmental organization. The Yarok Achshav (“Green Now”) group expressed its satisfaction at the resolution of the issue, preventing further damage to the environment by Arabs in the area.

The site of the dump, near the Arab village of Kafr Duma, was situated right atop a well that tapped directly in into the large aquifer that runs under Samaria. Continue Reading »