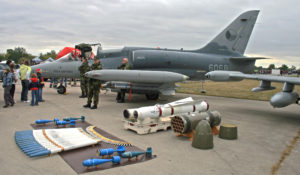 Vidochody, the largest Czech aircraft manufacturer and IAI will integrate new state-of-the-art avionics and other solutions on the L-159 platform and will jointly market the aircraft. The two also agreed to integrate IAI’s virtual training solutions as part of the L-39NG training system to enhance pilot training.

Financial details of the agreement were not disclosed.

“Together with IAI, Aero will be ready to offer aircraft with the best available technology. The agreement brings us together with a strong international partner with access to new potential customers,” said Giuseppe Giordo, Aero Vodochody president and CEO.

The L-159 is a light multi-role combat aircraft designed for air-to-air, airto- ground and reconnaissance missions. It has been successfully operated and tested in NATO joint operations, Red Air exercises as well as real combat missions.

“The cooperation with Aero Vodochody opens up new and exciting opportunities by combining the impressive proven performance of the L-159, with new innovative IAI systems, to provide customers with aircraft that meet their future requirements,” said Joseph Weiss, Israel Aerospace Industries President & CEO.

While ties between the Czech Republic and Israel have not always been close, Prague was crucial in the establishment of the Jewish state and was its major arms supplier, providing almost 35,000 rifles, pistols, machine guns, mortars, ammunition, bombs and 25 Avia S-199 fighter jets to the fledgling IDF.

Czech Defense Minister Martin Stropnicky said last year that Prague would spend some $7.1 billion over the next 10 years to upgrade the country’s armed forces and in June of last year the Czech Republic announced that it would be sending a new attache for defense industries to Tel Aviv in charge or research, development and purchasing in the defense ministry.

Defense Minister Karla Slechtova was quoted by local media as saying that the documents for the acquisition of the radars had not been approved by the Czech National Cyber and Information Security Agency, therefore, making it impossible to integrate them with NATO infrastructure.

“I will not accept such a major and dangerous order without connecting [the radars] to NATO,” Slechtova was quoted by local news site Novinky.cz as saying.

The eight ELM-2084 multi-mission radar (MMR) systems allows for the monitoring, tracking and interception of several airborne projectiles simultaneously at an altitude between 100m. to 3,000m. and cover a wide area of about 250 km.

The ELM-2084 MMR system was expected to be delivered no later than 2021 to replace obsolete Soviet-made radars that the Czech military received in 1991.