Israel’s Druze communities, supported by the Tourism Ministry, are appealing to the Israeli weekend tourist, largely with their traditional cuisine, in an industry where the women have a huge influence.

Hurfeish, Israel — Ibtisam Fares hunched next to a small outdoor oven, making fresh pita bread topped with spreads of za’atar, fresh red pepper, and meat. She brought them to an outdoor table already covered with local delicacies including humus, stuffed grape leaves, and an array of fresh salads, chopped just moments before. A jug of lemonade with fresh mint stands waited for thirsty visitors. 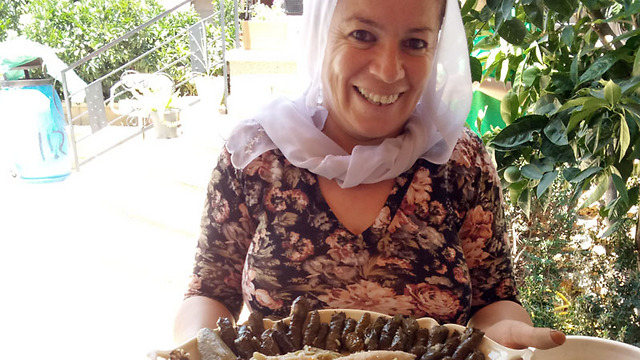 Fares, a white scarf worn loosely around her hair in the traditional Druze fashion, hired two neighbors, both women, to help her cook and serve groups of mostly Israeli Jews who come to visit the town on the weekends.

“Since I was a little girl, I loved to cook,” she told The Media Line. “My mother wouldn’t let me help, but I watched carefully and learned everything from her.”

Druze cuisine is similar to that of neighboring Syria and Lebanon and uses spices native to the area. Everything must be made fresh, and leftovers are never eaten, she said

Fares, who also works as a secretary in the local municipality, is part of a revolution of Druze women who are starting businesses that will not compromise their traditional lifestyle. The Druze, who live primarily in Israel, Lebanon, and Syria, maintain a traditional lifestyle. That means that it is considered inappropriate for religious Druze women to leave their homes to seek employment. But there is no reason the work can’t come to them.

Fares is one of dozens of Druze women who are opening home-based businesses in ways that do not compromise their culture. In some cases, the women are the sole breadwinners in the family.

A few blocks from Fares’s home in this town of 5000 that is overwhelmingly Druze, a handful of women sit in a circle crocheting lace. Called Lace Makers, the women meet once a week to work on their projects. The walls are lined with delicate embroidered table cloths and baby clothes the women are selling.

“Our village was in a tourism coma for ten years,” said volunteer Hisin Bader. “The only tourism we had was people driving through on the main highway (looking for a quick meal). But here, deep in the village, we had nothing.”

They started in 2009 with five women, she said, and today have 40. They are in the process of opening a second branch.

The Ministry of Tourism is helping them, offering courses in entrepreneurship and helping with advertising. A ministry spokeswoman, Anat Shihor-Aronson, said that they support initiatives such as Lace Makers as a “win-win situation.”

“The Druze have so much to offer anthropologically, culturally and culinarily,” she said. “They are so authentic, and we want to encourage them.”

The views from this town of 5000 in the mountains of northern Israel are stunning. The air is cool, even in the summer. Several families have opened bungalows for vacation rental, and in the summer they are full of Israeli Jews from Tel Aviv escaping the heat of the city.

Tourist stall in Druze village in the Upper Galilee

The Druze are an Arabic-speaking minority who live throughout the Middle East. In Israel, there are about 130,000 Druze, mostly in the northern Galilee and the Golan Heights. Throughout the world, there are about one million Druze. They trace their ancestry to Jethro, the father-in-law of Moses, who they say was the first Druze prophet.

Their religion is secret, focusing on belief in one God, heaven and hell, and judgment. Anyone who marries out of the faith is excommunicated, says Sheikh Bader Qasem, a spiritual leader and a descendant of the village’s first spiritual leader, Sheikh Mustafa Qasem. They are cut off from their family and may not be buried in a Druze cemetery.

Sitting on a red velvet chair in the middle of the prayer hall carved from stone, Qasem described the danger of intermarriage for the Druze.

“Intermarriage today could lead us to extinction,” he explained. “People always say that for love there is no border. In our community, there is a border.”

Another unique trait of the Druze is that they are loyal to the country where they live. In Israel, all of the Druze men are conscripted, like all Jewish Israelis, although Druze women do not serve for reasons of modesty. Sheikh Bader’s son is about to start his service in one of Israel’s most elite units.

Many Druze men have army or police careers. Faraj Fares was the commander of part of northern Israel during the second Lebanon War ten years ago. He was responsible for the safety of tens of thousands of Israeli residents as Hezbollah fired hundreds of Katyusha rockets at northern Israel. Fares was asked to light a torch at Israel’s Independence Day celebrations the following year, one of the country’s top honors.

These days, he runs a mountain-top restaurant called Delicacies in the Orchard surrounded by plants and trees on a mountaintop outside the town of Rame. Fares said he wants guests who know how to slowly savor a meal, not bolt down a quick bite on their way to somewhere else.

Reprinted from The Media Line