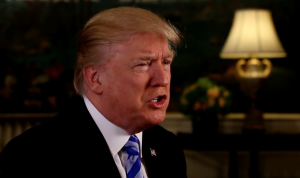 US President Trump’s initial instinct to assess the pandemic as less lethal caught many by surprise, but he wasn’t wrong about corona death rates says an Israeli medical engineer whose team developed predictive protocols that helped curb the 2014-2015 Ebola epidemic for African nations.

US President Donald Trump came under intense criticism for his initial dismissal of the coronavirus as little more than a bad flu outbreak. But an Israeli expert says Trump wasn’t far off the truth, at least in regards to expected fatality rates.

Dr. Dan Yamin is an engineer who while doing research at the Center of Infectious Disease Modeling and Analysis at Yale University was part of a team that developed predictive models that helped African nations to curb the Ebola epidemic of 2014-2015.

In an interview this month with the Israeli newspaper Ha’aretz, Dr. Yamin suggested that the 3.4 percent fatality rate being bandied about by the World Health Organization is much too high.

“If I can only carry out a few tests, I will test those who have the highest chance of becoming ill, and then, when I check the mortality rate among them, I will get very high numbers,” he explained.

Dr. Yamin said that South Korea offers the most realistic statistics because it managed to test the highest percentage of the population. And there, the official death rate was just 0.9 percent.

Israel, he continued, stands to fare much better, given that South Korea’s population is relatively elderly, while Israel has one of the highest fertility rates in the developed world, making its population very young.

In a worst-case scenario, said Dr. Yamin, half of all Israelis (4.5 million) will become infected with COVID-19, and 0.3 percent (or 13,000) of those will die. While that number still sounds terrifying, he pointed out that up to 2,500 Israelis die every year from other respiratory-related ailments and no one bats an eye.

Absurdly, concluded Dr. Yamin, we must admit that in the end “Trump was right. Not that the coronavirus is just plain flu – it absolutely isn’t – but as he put it: ‘This is just my hunch – way under 1 percent’ [will die].’”

Since then, Trump has sounded a slightly more cautious tone, saying America will have done well if, as US experts now predict, some 200,000 Americans die. Still, assuming between 30 million to 60 million Americans become infected, that fatality rate still falls well within Dr. Yamin’s predictions.