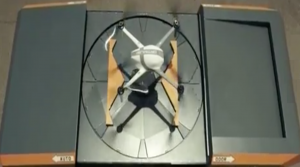 “We just made history…It flies itself, it’s completely automatic and the best metaphor I can give is if tomorrow somebody gets that same certification to operate an autonomous car with no driver…it’s huge,” Airobotics co-founder and CEO Ran Krauss, told Reuters.

Self-flying drones have been launched before, but Krauss says the 7.5 kg (16.5 pound) quadcopter, called Optimus, is the only solution to automate the entire operation.

Optimus is capable of carrying a one kilogram (2.2 pound) payload at a 36 kilometres per hour for 30 minutes.

The system, which takes off, flies and lands prescheduled missions or missions on demand, is comprised of three components, – the drone, cloud-based software and an “Airbase”, or docking station.

The Airbase connects the vehicle securely to its base, preventing the common landing difficulties caused by turbulence created by rotors kicking up. As the drone lands back on the launch pad, brackets slide into place to anchor the UAV (unmanned aerial vehicle). The weatherproof base then automatically closes over the launch pad, encasing the drone safely inside.

The drone is capable of carrying cameras, sensors and lasers, and it is equipped with a parachute in case of malfunction. In between missions, the drone is housed in a weatherproof box, or docking station, the size of a tool shed, where a patent-pending system attaches to the vehicle and recharges or swaps batteries and payloads, if necessary.

“The goal of the whole system is to create what we call full cycle automation, that’s to launch, fly, land, maintain and repeat,” said Elan Frantz, head of research at Airobotics.

Airobotics’ 130 employees work out of a massive hangar in Petah Tikva, central Israel, where they manufacture the carbon fibre skeleton, develop the software, and test the drones at an outdoor facility from a control room. The company, founded in 2014, recently opened an office in Perth, Australia.

The systems’ makers say several industrial enterprises, including one of Intel’s biggest fabrication facilities based in Israel, Australia’s mining company South32 and ICL, the biggest mining company in Israel, have already put the drone to use.

Krauss, a serial entrepreneur, said they plan to roll out their multi-purpose drone technology system in industrial facilities, seaports, power plants, fabrications facilities, mines and oil and gas facilities in the United States, Singapore and Japan. The second phase, Krauss said, will be to fly the drones to carry out emergency response missions in cities. He said the drones could also be used for commercial purposes, such as package deliveries and mapping.

Krauss envisions a sky packed with quadcopters – their routes possibly charted by a navigation program such as Waze – and multiple docking stations on the ground.

“How do you fly these things in the city or out of the city without colliding with other aircrafts or other drones? You need to map the sky. So the future looks bright and this is the building block,” said Krauss.

Israel’s Civil Aviation Authority has authorized the operation of the fully automated system, the first time such approval has been granted by a government agency, Krauss said. This, he said, gives the company an advantage over any potential competitors.

Airobotics has raised a total of over $30 million and intends to go public but not in the immediate future.