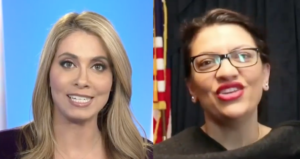 At least one Israeli TV anchor tore Tlaib to shreds over that disingenuous holiday greeting.

She likewise stressed that Tlaib’s acknowledgement of the events marked on Hanukkah would seem to contradict the Palestinian narrative of which she sees herself as a champion. The Maccabean Revolt commemorated on Hanukkah occurred in 165 BC, centuries before the Romans renamed Judea to “Palestine” to insult the defeated Jews.

Louis Farrakhan supporter and Sharia law advocate Linda Sarsour (3rd from Right) stands with Rep. Rashida Tlaib (2nd from right) holding a map where they have replaced the State of Israel with ‘Palestine’.

Acknowledging Hanukkah means you acknowledge a long and deep Jewish history in this land that goes back millennia before anyone anywhere was calling themselves “Palestinian.”