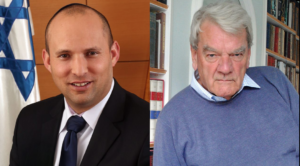 Bennett sent a letter to Poland’s Ambassador to Israel Marek Magierowski, saying that Irving’s record of Holocaust denial demonstrated that the trip he is leading is designed to further his false historical claims.

“Given Irving’s record of abhorrent statements and outright lies about the history of Holocaust, it is quite clear that he intends to use this opportunity to spread further falsehoods and vitriolic narrative,” wrote Bennett. “In so doing, he will doubtless cause deep offense to the memory of the victims of the Holocaust and to all the Jewish people, as well as stoke the already raging fire of hatred and antisemitism we are witnessing around the world today.”

Bennett requested that the Polish government prevent Irving and his group from entering Poland and from entering the sites of the death camps.

Irving is set to take a tour group on a nine-day visit to Poland in September, at a cost of $3,650 per person, and will go to the Treblinka, Sobibor, Belzec and Majdanek death camps.

In 1996, Irving sued American historian Prof. Deborah Lipstadt for libel, after she called him a Holocaust denier in her book Denying the Holocaust.

Three courts subsequently found in favor of Lipstadt concluding that Irving was a Holocaust denier, an antisemite and a racist.

Irving has denied the existence of gas-chambers at Auschwitz, saying “I don’t see any reasons to be tasteful about Auschwitz. It’s baloney. It’s a legend. . . . I say quite tastelessly, in fact, that more women died in the back seat of Edward Kennedy’s car . . . than ever died in a gas chamber at Auschwitz.”

The Polish Embassy in Tel Aviv could not immediately be contacted for comment.